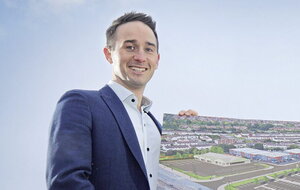 The retailer, which has opened 41 stores in the north since 1999, is altering its location strategy, which will eventually see it open in towns with smaller populations.

Lidl’s location expansion will be run alongside its ongoing store replacement programme, which has already seen 18 of its northern stores modernised.

The 19th replacement store is set to open in Omagh on October 13.

Lidl has previously announced its medium-term target of achieving 50 stores in Northern Ireland by 2030.

But in an exclusive interview with The Irish News, Lidl’s property director Chris Speers said the company’s longer term strategy is now for 66 locations.

Ideally, he said the retailer would like to complete six projects each year, including two brand new location stores.

However, that will very much depend on the planning process and availability of suitable sites.

Lidl has already tasked property firms CBRE and Lambert Smith Hampton with helping it locate new sites as part of the goal of opening in 25 new locations.

“The aim is to bring our market leading prices and quality to more communities in Northern Ireland,” said Mr Speers.

“We generally work in catchments, both urban and rural hinterlands, of around 20,000 plus people. And there’s still many of those 25 stores within that category.

“But there’s also now a willingness to look at smaller catchments of around 15,000 plus, which brings in a lot of new towns we hadn’t considered in years gone by, as we were prioritising the bigger catchments.”

Since opening its first store in Cookstown in 1999, Lidl has established itself as the north’s fastest growing retailer, employing 1,100 people across 41 stores and a major distribution hub at Nutts Corner.

It’s understood Bangor and south Belfast are high on Lidl’s target areas. The retailer is expected to secure planning permission on a new Boucher Road outlet in the coming weeks.

It will be Lidl’s first in south Belfast, but it’s unlikely to be its last.

“South Belfast has been underrepresented by Lidl for a number of years,” said Mr Speers.

As well as looking in smaller catchment areas, Lidl has also adapted its store strategy to take on units which don’t necessarily fit within its traditional format.

“The format of our stores, the locations and types of sites that we’ve looked at has evolved a fair bit,” said the property director.

“We’re being more agile, more flexible when it comes to the model of the building we use or the location.”

That flexibility has seen Lidl step into units Newry’s Buttercrane centre and the High Street Mall in Portadown. The grocer also helped revive the Hillview Retail Park in north Belfast, with a number of other major retailers following its lead to the Crumlin Road location.

However, Mr Speers said it’s unlikely Lidl would repeat that strategy for Craigavon’s Rushmere shopping centre, where a large anchor supermarket unit has been vacated by Sainsbury’s.

Developing six supermarket projects per year will see the German multiple invest heavily in Northern Ireland in the coming years.

Chris Speers said the company had been spending between £12 million to £15m per year on store development around five years ago. It’s on course to triple that spend next year.

That in turn will create more jobs in both construction, retail and the food supply chain.

In tandem with its growth plans, Lidl has also committed to paying its staff more.

Around 1,000 staff in the north will see their hourly rate of pay rise from April after the retailer reaffirmed its commitment to the voluntary Real Living Wage rate.