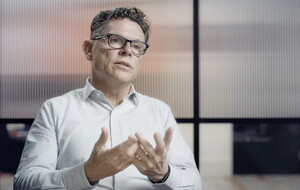 The company, which took a significant private equity cash injection from London-based Tenzing last year, recorded a 37.5 per cent jump in sales to £12.6 million for the year ending March 31 2022.

Set up in 2005 by Robbie O'Brien, MetaCompliance now has offices in Dublin, London, Birmingham and Atlanta.

But it remains rooted in a 7,000 sq ft premises on Derry's Patrick Street.

Its services are used by more than 900 organisations across the public and private sectors, with a focus on cyber security threats and regulatory compliance.

In the report published by Companies House, MetaCompliance said 2021-22 had been “transformational” for its financial plans.

The cyber security firm said 20 new employees were recruited last year, with plans to add another 31 jobs by March 2023, taking its workforce to around 150, a 25 per cent growth inside 12 months.

Cyber security is one of the north's fastest-growing tech sectors.

One consequence of that growth, coupled with new overseas firms setting up in Northern Ireland, is the competition for skilled staff.

In a summary of MetaCompliance's business performance in the past year, Robbie O'Brien said the Derry firm is experiencing two separate pressures in terms of employee recruitment and retention.

“The first is inward investment that will typically target existing local companies for experienced employees,” he said.

“The second has arisen due to the shortage of technical talent in the local labour market.”

The Derry-based tech firm said the increase in remote and hybrid working had worked in its favour, increasing its access to “technical resources”.

But one area where it is continuing to face challenges is finding senior managers.

“MetaCompliance has a vibrant young workforce,” said Mr O'Brien. “However, there is a limited access to senior managers with suitable experience in IT security and SaaS [software as a service] industry in the north west of Ireland.

“Consequently, it takes significantly longer to obtain a list of potential candidates and senior appointments can remain open for a longer period of time.”

MetaCompliance's growth plans received a significant boost in June, when it completed its first acquisition.

Backed by Tenzing, the Derry firm bought Copenhagen-based cyber security firm MOCH as part of its plans to expand the business in continental Europe.