Castlebrooke “frustrated" by pace of Tribeca scheme as debt soars 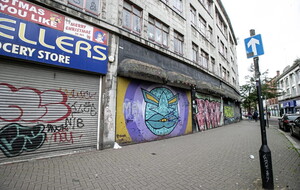 Derelict and empty properties on Belfast's North Street, which is included in the Tribeca proposals. Picture by Hugh Russell.

THE London company behind plans to redevelop 12 acres of Belfast city centre has said it is “frustrated” at the pace of progress as its debt grows into the tens of millions.

But two years on and no new planning applications have emerged to progress the development, with Castlebrooke owing its creditors £75.2m as of June 2021.

Previously led by the Department for Social Development (now Department for Communities), the largely derelict project site has gone through a number of incarnations over the past two decades.

In its current guise, the scheme involves a £500 million redevelopment of properties and lands between Royal Avenue and Donegall Street.

But almost six years after acquiring the properties from Cerberus, Castlebrooke has little to show for its investment.

Accounts filed by Castlebrooke subsidiary Project Goat, which owns its Belfast assets, show interest on a £37.6m loan increased by £12m in a year to £37.6m as of June 30 2021.

Derelict and empty properties on Belfast's North Street, which is included in the Tribeca proposals. Picture by Hugh Russell.

Four senior figures at Revcap, including its founding partner Will Killick, are listed as directors of Project Goat, which is ultimately owned by Castlebrooke’s founder Neil Young.

Additional finance was sought by Castlebrooke in April 2022, with properties on Donegall Street and North Street used as security for the fresh loan.

The major stumbling block to progress in the Tribeca scheme is understood to surround both the social housing aspect and Writers’ Square, a public area next to St Anne’s Cathedral, owned by the Department for Communities (DfC).

The square is also home to a social housing scheme operated by Choice, which is set to be demolished under Castlebrooke’s proposals.

The former North Street Arcade, which has been derelict since a 2004 arson attack. Picture by Hugh Russell.
Social housing provision is one of the key issues contained in the section 76 legal agreement between the developer and Belfast City Council, which validates the outline planning approval for Tribeca,

It stipulates that Castlebrooke provide a new Choice facility and progress the social housing aspect first.

In the wake of the Covid-19 pandemic, and the reduced demand for office space, the residential aspect of the Tribeca scheme is now seen as more likely to progress first.

Castlebrooke paid £3m for a nearby site on Academy Street a number of years ago to develop a new high-rise social housing scheme for the 50 units Choice Housing requires.

The site already has planning approval for an 87-unit build-to-rent apartment tower, that would require an amended application.

But The Irish News understands that Castlebrooke won’t progress that scheme until DfC relinquishes public ownership of Writers’ Square, an area believed to be central to its plans.

The development brief, which would see the land put out to public tender, to be acquired by Castlebrooke, has not yet been issued by DfC.

The issue of public space and built heritage has proved the most controversial aspect of the entire Tribeca scheme, with hundreds of objections lodged throughout the planning process.

In a statement, a spokesperson for DfC said: “In determining the future of Writers’ Square the department will objectively assess any proposals, and this will include its future use as a public space.

“The department is aware of the public interest in the square and any decision taken in determining the best use for the site will be in the interest of Belfast city as a whole.”

DfC said it continues to engage with Castlebrooke, but said the discussions are considered commercially sensitive.

In a statement, Castlebrooke claimed it had invested £40m in Belfast since 2016 “through planning and professional fees, community contributions, city marketing and acquisition costs”.

Visuals previously produced by Castlebrooke for the redevelopment of Writers' Square.

“We have also paid nearly £1m in rates in that time with virtually zero revenues, so nobody is more frustrated than us at the pace of progress with this scheme.

“We very much want to get on with the development and start achieving a return on our investment while delivering the regeneration this historic part of Belfast city centre so needs and deserves.

“We will continue to work with the council, DfC and all stakeholders in the city to try and deliver that regeneration and a commercially viable development,”

Belfast City Council said it continues to meet and engage with Castlebrooke to assist progress with the scheme in line with its strategic goals for the city centre.

But a spokesperson said: “While council will work with developers and other stakeholders, insofar as it can, with the delivery of schemes, these are ultimately commercial enterprises.”