Belfast actress Ruby Campbell, one of the stars of the annual Christmas show at the Lyric Theatre, tells Gail Bell why she is warming to her inner Snow Queen, who is just a little 'misunderstood'... 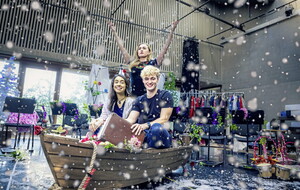 RUBY Campbell is channelling her inner Snow Queen, but being chilly does not come easily to the affable Belfast actress.

Yet, her latest role as a ‘baddie' in the Lyric Theatre's Christmas production – The Snow Queen, which opened on Friday and runs until New Year's Eve - is perversely keeping her warm, thanks to hours of intensive dance practice and cardio and strength training in preparation for the all-action show.

“The Snow Queen is very icy and cold, obviously, but I prefer to think of her as just a little misunderstood - and there is a heart there, somewhere underneath,” laughs the Larne-born graduate of the Royal Central School of Speech and Drama in London.

“Our choreographer, Deborah Maguire, certainly put us through our paces – we're going to be fit as fiddles. I trained in musical theatre, so I am used to singing and dancing, but I have to say, it's been a few years since I have been dancing and singing this much. I do yoga which helps, but I have had to work hard to build up my stamina.”

Based on Hans Christian Andersen's classic tale, The Snow Queen is, at heart, a personification of good and evil, but it is also a story of courage, adventure and friendship as Gerda (Calla Hughes) sets off on a quest to find her friend Kai (Ben McGarvey) who has been lured away to Norway's frozen peaks by Campbell's cold-hearted queen.

Paul Boyd's all-new musical version, comprising puppetry – “including an amazing reindeer made by Belfast-based designer, Enda Kenny” - stays “pretty faithful” to the symbolic 19th century fairytale, but the actress says there are some “really poignant moments” within the Snow Queen's own story.

“She does lure Kai away from his family home – for reasons you find out during the show,” teases Campbell. “Does she have a heart? I think she does – she just needs to defrost a little bit...

“There is a lovely element of magic throughout, with Gerda also on a journey to find out what her own magical powers are and everything is linked in with the elements – earth, water, fire and air.

"What I really love are the amazing dance numbers, with the music style shifting with the geography - from hot to cold – so, we go from Latin influences to something really different when we reach Scandinavia. It's magical and mystical, while still being that classic adventure story and I think people are going to love it.”

Fresh from the Lyric's award-winning co-production of Brian Friel's Translations, the 28-year-old - who played Alice in another Boyd production at the Lyric – Alice The Musical - is relishing being back in Belfast after five years based in London.

“I moved back home in strange circumstances, after the pandemic, when no-one really knew what was happening,” she says, “so the transition was strange, but once I was here for a while, I thought, ‘You know what, this is the quality of life I want.

“Theatre is not so London-centric anymore and people are valuing that sense of community and the shift towards supporting local – and that includes the arts sector.

"I love the artistic community in Belfast – there's a really strong community vibe which was obviously really important throughout the pandemic – and I just felt I had found my tribe again.”

Her first role after moving back ‘home' was also at the Lyric - in Tara Lynne O'Neill's Rough Girls which tells the remarkable story of the formation of Belfast's first women's football team towards the end of the First World War.

It stands out as one of her favourites, she says, not least for the fact that Rough Girls marked the re-opening of theatres after the pandemic, while also coinciding with the Northern Ireland Senior Women's team qualifying for Uefa Women's Euro 2022 for the first time.

“There was a really electric atmosphere because we were all back in the theatre, in one room, watching a live show,” she recalls. “To be on stage with 11 women – 14, including the three musicians – was such an amazing feeling," Campbell says.

“The story we were telling was so rich and so important for the local community and I think with the NI women qualifying for the Euros and all the anticipation that came with that, people who wouldn't normally go to the theatre, were drawn to see the show.

“That show also opened my eyes to the world of sport and the parallels between a live football match and going into a venue to see a live concert or piece of theatre. There is the same feeling and the same drama and excitement with both.”

Another recent highlight was one-woman show, The Half Moon (Green Shoot Productions at The Mac), penned by Belfast playwright Alice Malseed and exploring the lives of four generations of women, from the 1940s to the present day, living in the Tiger's Bay area of Belfast.

“I definitely had to be match-fit for that role,” recalls Campbell, who played four main characters – “and loads of others” – for an hour-and-a-half on stage. “It was a challenge, especially when I caught Covid during rehearsals which meant an element was on Zoom, which sort of broke the continuity.

“Despite the staging problems, though, it was well received because it was a beautifully written show and the Tiger's Bay community that inspired it really loved it and welcomed us with open arms.

"Who knows? It might have another life at some point and it's definitely a story that deserves to be heard by more people.”

Versatility is key for the actress who, when asked at her audition for drama school what kind of career she wanted, had no hesitation in replying that she wanted to “do something different every single day”.

“I have been really fortunate that I have been able to do that, as I have been involved with productions that have all been vastly different,” she says; “I enjoyed performing in NI Opera's Into the Woods at the Lyric earlier this year - but I love to always be switching from serious roles to musical theatre – and everything in-between.

Recently, she made the switch to film, acting in award-winning Indie film, Stumbling, adapted by Belfast film-maker Jonathan Harden and based on a radio script written by the late Co Armagh playwright, Joe Crilly.

Filmed in documentary style, Stumbling explores strained relationships within a dysfunctional family following claims of a sexual assault - and concludes with disturbing statistics on the reporting and prosecution of the offence in Northern Ireland. It won Best Independent Film Award at the Chichester International Film Festival this year.

“It is very dark, but also very witty,” says Campbell, who played the woman at the centre of the allegations. “Working in front of a camera demands a whole different skill set and it is something I would like to do more of, but I never want to step away from theatre.

“Since starting Saturday classes with the Rainbow Factory when I was about 11, I knew this was the life for me, although I always tell young people wanting this career that for every job I get, I have been rejected for six or seven. You need resilience and hope – a bit like Gerda in The Snow Queen, really.”