Review: Revved keeps the revs up, but could do with a slower gear 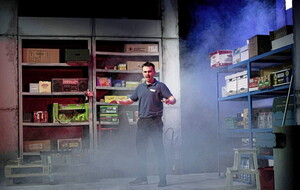 Patrick Quinn wrote and stars in his own one-man play, Revved, set in a Letterkenny filling station during the Donegal International Rally

ONE-woman and one-man shows have been having a moment, particularly at the Lyric Theatre, and not just because of the economics.

After the superb offerings this season from Amanda Verlaque and Paul McVeigh we got Revved by Patrick Quinn last weekend.

Mr Quinn also acted the tortured, but entertaining, guy stuck in a store room in a petrol station in 90s Donegal. So far, so dispiriting you might think, but no - this guy has interests beyond the freezer cabinet.

One is a girl called Katie, with blue eyes and brown hair, the other is cars. The enthusiasms overlapped in a bizarre yet fascinating passage when Eamon describes the auto he’s been lent during a key night of his life. This cute red hatchback is the other light of his life.

Of course, we knew from the start something bad would happen. Not the sort of existential thing you might expect from the young man stuck among the shelves of frozen peas, but something nastier. And bloodier, although the recurring motif was red sauce, something Eamon recalled his sister Orla pouring all over her dinner.

That was a nice, psychologically apt conceit. Using bumper packs of crisps and loaves of bread to symbolise other characters should have been an occasional device.

Overdone, it didn’t always enhance the comedy and terrible tragedy. When Eamon addressed his mate or his would be love interest, the glorious Katie, via some frozen goods, it wasn’t exactly "Alas, poor Yorick".

The passages that worked best were those about Eamon’s passion for the girl downing shots in the bar, then dancing, and (spoiler alert) the journey towards the big accident.

Singing Champagne Supernova by Oasis was fun. And Quinn’s joy at thinking he may finally be getting close to the love of his life was touching.

The psychological background was perhaps under-emphasised, though, with the textbook alcoholic father and absent mother referred to almost in an aside.

There were nice nostalgic moments as when Eamon recalls watching The Great Escape at Christmas and a family member wondering whether Steve McQueen would make it out this time.

The audience enjoyed that, also the Donegal bits and all the recognisable stuff about this small town boy.

In terms of acting, Patrick Quinn was maybe a little too revved up. He should move down a gear at times.

The differentiation of characters needs a little work and possibly Revved could function well in a shorter version, maybe on radio.

Emily Foran directed the play for An Grianán Theatre.

Review: Revved keeps the revs up, but could do with a slower gear