As Rock Choir singers start to make their voices heard in Northern Ireland, one of the new regional leaders, Clare Galway, tells Gail Bell of its unique appeal - and why she believes there is a tune inside all of us 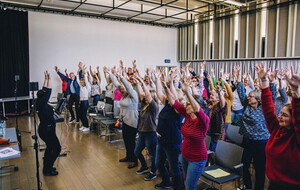 The simple joy of singing together alongside a shared focus and sense of community are central to the appeal of Rock Choir. Picture by James Ward

IT is not the sort of sound you might expect to hear echoing through the crisp evening air outside a Quaker Meeting House, but anyone walking past the group's south Belfast gathering place on the Lisburn Road a few weeks ago might have wondered why the worship had suddenly gone 'pop'.

For inside, here we all were, standing in front of rows of plastic chairs, lyric sheets in hands, clicking fingers and swaying rhythmically to Wham's upbeat Wake Me Up Before You Go-Go.

At the front of the room, enthusiastically leading the random mix of amateur sopranos, high and low altos - mostly women - was our dynamic leader, Clare Galway, one of two new professional recruits charged with setting up the phenomenon that is Rock Choir in Northern Ireland.

This was a free taster session in the hired venue but Clare - who takes three Rock Choir groups in total: this one in Belfast and two others at Lisburn's Island Arts Centre - says many of the first-time singers have signed up for annual membership (£300) with the Belfast choir currently the largest, sitting at over 40 members.

"The response to Rock Choir in Northern Ireland has just been mind-blowing," says the classically-trained mum-of-two who has previously sung with Belfast Community Gospel Choir and, after seven years, is still devoted choir leader with Féile Women's Singing Group, based at Cultúrlann in west Belfast.

"Initially, there were only supposed to be two workshops at the launch in The MAC in September, but such were the numbers registering interest that we ended up putting on six. It was all a bit mad..."

The appeal, she believes, is down to the simple joy of singing together - whatever level of talent or experience participants bring to the room - alongside a shared focus and sense of community.

Also, there are no auditions, so many would-be singers who may previously have felt excluded from other choirs are welcome to join this one.

Founded in England in 2005 by award-winning musician and singer, Caroline Redman Lusher, Rock Choir is now a household name, boasting over 33,000 members participating in around 400 communities.

Plans are well advanced to increase the Rock Choir groups in Northern Ireland too, according to Clare, who describes herself as a "gigging musician" who also tutors music to children and adults from her home in Lisburn and teaches violin in a primary and secondary school.

"At the moment, there are six choirs but there are definitely plans for more, so that Rock Choir is accessible to more people," she says.

"I take three choirs and the other Northern Ireland leader, Sophie Giraudeau, also takes three - in Belfast, Bangor and Newtownards. The whole idea is that Rock Choir will be in nearly every hub in Northern Ireland in the same way they are across the water.

"The interest is definitely there - and so are the singers. I know there are a lot of choirs already in Northern Ireland - we have a great choral heritage here - but Rock Choir seems to be answering the call for a new approach."

This is because there is a tune, she believes, in most people - the only challenge being the need to "slim down" our sometimes "flat and fat" Ulster vowels, so all regional rock choirs sing with the same sound and accent.

"I find it really interesting," she muses, "because people come to me and say they are tone deaf, but studies have shown that the proportion of the population globally who are literally tone deaf - that is where you play a note to someone and they cannot, not even with training, sing that note correctly back to you - is actually tiny.

"A lot of people come to the 'taster' and say they can't sing - though they like to sing in the car or in the shower - but when you sing in a group, you actually hone in on what everyone around you is singing and it increases your confidence levels in what you can achieve."

A music graduate from Queen's University, Clare joined Rock Choir after being interviewed - and auditioning - for her new role during the summer, later completing a "quite intensive" training programme which is undertaken by all 80-plus leaders dotted around the UK.

Always busy being a mum, teaching music, taking choirs and singing with vocal harmony trio Swing Gals and as a solo artist, she says the unique attraction of Rock Choir was that all the organisational details were taken care of, leaving her to do what she loves best - performing.

"Even if I'm feeling tired after a long week, when the first person comes to rehearsal, that sparks an energy within me and then, we are all singing together, I am buzzing," she enthuses.

"When I pack down my piano and my stand and put the chairs away at the end of a session, I am still singing away - it is definitely therapy for me, as well."

The physical and mental health benefits of singing together are well documented and Clare - who counts a gig at Glastonbury in 2007 with band, The Winding Stair, and singing with Swing Gals at the SSE Arena for the Belfast Tattoo in September among her career highlights to date - says the "feel-good" song choices favoured by Rock Choir are part of the life-affirming ethos.

"The songs are all carefully chosen," she explains, "and there is a lot of work that goes on behind the scenes - arranging the music, buying licences and recording them for practice tracks, making lyrics available for people to download on a massive scale.

"There is an online choir as well and with 'Rock and Sign' there is also now the chance to learn to sign with British Sign Language, making the choir even more inclusive and allowing people who are deaf or who have hearing difficulties to enjoy our concerts too."

Who knows if the Northern Ireland groups will follow the heady success of those which have already won record deals, starred in TV documentaries or popped up at high-profile events - at the 2018 BBC Proms in the Park in London, a flash mob of more than 10,000 Rock Choir members secretly positioned among the audience stole the show - but they are starting off quietly, first with a charity gig at Stormont this Christmas.

"We haven't made a name for ourselves as performers yet within the local entertainment scene, but I hope people will know our name soon."