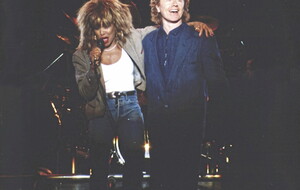 However, all is to be revealed in the new autobiography, Crazy Dreams, just published by Merrion Books.

All through his working life, there seems to have been a tension between Brady's public perception as a folk singer and that of a rock megastar. Although born in Barrack Street in Belfast, the Bradys moved to Strabane with the young Paul going to the Sion Mills Primary Elementary where his mother taught.

Brady's father Sean was also a teacher who was blessed with an ability to entertain. The summer holidays were spent in Co Donegal and here Sean Brady got his chance to shine.

"I remember him in Bundoran during our summer holidays holding entire rooms in the palm of his hand, leaving people in tears," recalls Paul, something he himself would do later on but on an international scale.

At home in Strabane, he didn't have an awful lot of connection with his own generation except the friends he had in Church Street where he lived and in the Bowling Green and other places in the town.

A bit of a loner, he taught himself to play the piano and the guitar and ended up playing guitar in the house band of the Holyrood Hotel in Bundoran when he was just 15 years old, playing along to the hits of the day.

However, in the early 1960s, the Tyrone man fell under the spell of the British Blues Invasion that swept Ireland and Britain and he played in a number of bands – The Inmates, the Kult, Rootzgroop and Rockhouse, the latter supporting The Who in Dublin's National Stadium in May 1966 – and then by soul music from the likes of Otis Redding, Wilson Pickett Ray Charles, Ike and Tina Turner, and Ray Charles.

This, you'll agree, was perhaps an unlikely background for someone who took traditional music by storm, changing it for the better, either as a solo artist or with the likes of Andy Irvine, Tommy Peoples and in some of the best groups of that era.

Don't forget too, that traditional music was wasn't featured highly on mainstream radio at the time, except on the sponsored programmes on Raidió Éireann, The Waltons programme on a Saturday afternoon or as part of the Gael Linn programme.

It was when Brady started playing with Tom Keane, brother of the Chieftains' Seán Keane, that he began to appreciate the quality of our native music.

"When I left the rhythm and blues bands, there was a whole rush of folk clubs starting up in Dublin so I kept going around these clubs singing country and blues and other stuff and it was there that I got noticed," he says.

"I was asked would I open for the Johnstons who were already a very successful folk group at the time, in a place called the Embankment out in Tallaght, which was in the countryside then, although it's part of Dublin metropolis now.

"Another person playing on the same bill as me and the Johnstons was the accordion player James Keane, brother of the Chieftains' Seán Keane.

"And so I'd get up and do my 15 minutes of country blues and then James would get up with a bodhrán player called Carmel Quinn and eventually, I started listening to James who was an absolute genius on the accordion. His musicality was just so to the fore.

Later, Paul was asked to join the Johnstons. However, it could have been different.

"A week after I had committed to join the Johnstons, Andy Irvine, unaware of my decision, asked me to join Sweeney's Men. It never rains but it pours. A major 'Oh, sh*t!' moment," he writes in Crazy Dreams.

Still, the Johnstons were hugely successful in Ireland, Britain and the USA but Brady never really thought the band were the pinnacle of what he wanted to do – and then an offer arrived through his letter box.

Christy Moore was leaving Planxty and Liam Óg O'Flynn wanted to know if Paul would take his place. Needless to say he jumped at the chance.

Brady had been working on his guitar style all the while. On his masterpiece, Arthur McBride, he plays the guitar not just as accompaniment but also as melody.

"That developed as I got further into folk music," he explains, "and started listening to people like Joni Mitchell and Mississippi John Hurt.

"But when I was playing with James Keane, I had just come out of two or three years of playing rhythm and blues and rock music on the guitar so I brought that kind of dynamic to my accompaniment of Irish music. And I suppose that was different to what had been done before."

However, one gets the feeling reading Crazy Dreams that Brady's career feels unfulfilled, although he denies it.

Yes, he had huge success, feted in Ireland and beyond, yet he writes: "I kept getting this feeling that I hadn't begun my real work yet, that I'd been biding time all these years indulging in something that, however successful, wasn't really me or mine."

I ask him what his "real work" was but he says he might have been a little bit "hard" when he wrote that.

"It wasn't as black and white as that," he says.

"Obviously, my interpretations of traditional songs and my instrumental prowess such as it was in traditional music was a very much a part of me, but I just had another string to my bow, that whole other side of me that I hadn't yet discovered.

"The way I describe it is like, inside yourself, there's a lot of rooms, and some of them you haven't been in. So I went into another room and I found myself wanting to write songs and to write music which would have been a synthesis of all my influences up to that, from pop blues, rock, jazz, trad and folk.

"In my music ever since you can hear all those those influences."

And what an eclectic back catalogue it is, everything from The Homes of Donegal to Crazy Dreams, Nobody Knows, The Lakes of Pontchartrain and perhaps his most famous song, The Island. (He says it isn't about Ireland – I tell him no-one believes that...).

There are the songs seized upon by Bob Dylan, Mark Knopfler, Bonnie Raitt, Tina Turner – their stories are all in Crazy Dreams – as well as the ups and downs of a musician's journey to find his true muse in an ever-changing musical landscape.

I ask Paul where he gets his validation from – is it audience reactions, big album sales, the respect of the A-listers mentioned above?

"It's a combination of all those, I think," he says.

"I actually enjoy still performing to an audience. In fact, more so than I've ever done in my life.

"I've never really been into worrying about big album sales. It's nice when you get a nice review and it's nice when somebody gets you.

"I've never been easy to 'get' because I've never had a simply recognisable image, I don't know what I am. I'm not surprised that nobody else does," he says.

So maybe it is true – nobody knows Paul Brady...