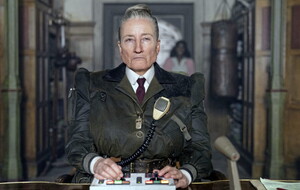 Emma Thompson holds nothing back as the tyrannical Agatha Trunchbull in Roald Dahl's Matilda The Musical.

In cinemas from November 25.

IN 2010, director Matthew Warchus scored top grades for his euphoric staging of Matilda The Musical in Stratford-upon-Avon as part of the Royal Shakespeare Company's Christmas season.

The show transferred to London's West End the following year and continues to send terrific tykes to the Chokey.

Warchus reunites with composer and lyricist Tim Minchin and scriptwriter Dennis Kelly for a swashboggling, phizz-whizzing screen adaptation that retains the acidic tang of Roald Dahl's beloved 1988 children's novel and elegantly expresses the loss and reclamation of childhood innocence in barn-storming song and dance numbers choreographed with breathless abandon by Ellen Kane.

Warchus savours the opportunity to expand his playbox from stage to big screen.

Minchin's whistle-stop tour of the alphabet in School Song (“You will soon C/There's no escaping trage-D”) is no longer confined to Rob Howell's Olivier and Tony Award-winning set and gallivants energetically through classrooms and hallways.

The empowering When I Grow Up, memorably sung on stage by daydreaming pupils on soaring playground swings, loses some of its lump-in-the-throat emotional wallop when digital trickery allows pint-sized cast to ride a motorcycle or take to the skies in an acrobatic fast-jet.

The precocious youngster escapes into fantastical worlds on the shelves of a mobile library run by Mrs Phelps (Sindhu Vee).

Aristotle spoke the truth: the roots of education are bitter but the fruit is sweet.

Warchus's picture is a peach.