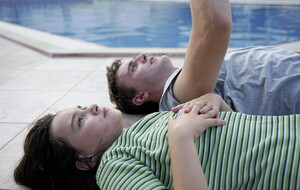 Frankie Corio as Sophie and Paul Mescal as Calum in Aftersun

A JURY Prize winner at Cannes and currently up for 16 gongs at the British Independent Film Awards, Charlotte Wells's debut feature Aftersun arrives in cinemas with a fair weight of expectation behind it.

This is matched by the emotional heft of the film itself, a meditative drama centred on a father and daughter's package holiday to Turkey in the late 1990s. Initially, Callum (Paul Mescal) seems like your average easy-going young dad, doting on and joking around with his cute and playfully observant 11-year-old daughter, Sophie (an auspicious debut for Frankie Corio) as they lounge by the pool, mock the hotel's on-site entertainers and take silly videos of each other on their digital camcorder.

Gradually, though, Wells begins to expose the cracks in Callum's facade: there's a story behind that cast on his wrist, a reason why he's constantly running through Tai-Chi routines ("Dad's doing those weird ninja moves again," Sophie cringes down the phone to her mother, whom we learn is separated from Callum) and reluctant to talk about his childhood on camera.

"I doubt I'll be around when I'm 40 – I never even thought I'd make it to 30," Callum reveals in a rare candid moment, this troubling glimpse into a damaged psyche shared as a throwaway remark during a casual conversation with a virtual stranger while his daughter is safely out of earshot.

Which begs the question: how does Sophie even know this exchange took place? As Aftersun unspools at an evocatively languorous pace, we come to realise that the adult Sophie (Celia-Rowlson Hall) is revisiting this pivotal holiday from the onset of puberty via a combination of old camcorder clips and her own memories, the most mundane details of both now instilled with heightened emotional resonance and long embellished via imagination in the wake of the subsequent seismic life events which the film only hints at.

Mescal does a fine job of portraying a man valiantly fighting inner turmoil while attempting to hide it from his loved ones. In one scene, Sophie innocently explains how sometimes she's left feeling "heavy, down and exhausted" even at the end of an otherwise brilliant day: just for a second, Callum's mask slips, as Mescal violently projects the crushing wave of instantaneous self-loathing which slams into this man at the awful realisation that his daughter may also be doomed to depression via inescapable genetics.

He's helped immeasurably by being able to play off Frankie Corio, who delivers a superbly naturalistic performance as the intelligent, empathetic beyond-her-years Sophie, who senses there's something 'wrong' with her father that's just beyond her powers of articulation.

Despite its languid tempo – or, perhaps, because of it – a palpable tension builds throughout Aftersun's final third as the holiday draws to a close and an imminent return to reality seems to push Callum towards the edge of an increasingly precarious psychological precipice.

Proceedings become imbued with a warped, nightmarish quality that's hard to shake off long after the end credits have rolled on this assured and auspicious character-driven debut feature for Charlotte Wells.

:: Aftersun opens at QFT Belfast on November 18, see queensfilmtheatre.com for tickets and showtimes.

New to stream: The Forgiven and Wednesday