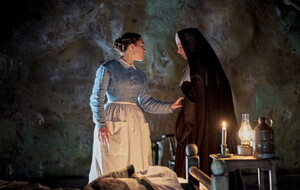 Florence Pugh as Lib Wright and Josie Walker as Sister Michael in The Wonder, filmed in Co Wicklow and set in Ireland during the Famine. Picture by PA Photo/©Aidan Monaghan/Netflix 2022

"I LOVE a dark script, me," laughs Florence Pugh as we sit down to talk about her haunting new film, The Wonder.

Fans of the talented 26-year-old will find that no surprise as her filmography is rich in thrillers, but Sebastian Lelio's The Wonder carries a distinctive kind of folky darkness, bound in the isolation of rural Ireland's mountainous countryside.

In 1862, 13 years after the Great Famine, an English Nightingale Nurse named Lib Wright – played by Pugh – is called to a devout religious village in Ireland to investigate a miraculous curiosity.

Anna O'Donnell, an 11-year-old girl played by Kila Lord Cassidy, has apparently not eaten for four months and survives on 'manna from heaven'. Lib must join a nun in keeping watch over the girl and unearth the truth about her fasting, something which is much more complicated than it might first seem.

Based on the Victorian phenomenon of 'the fasting girls', The Wonder is an introspective film; a folky, mystery-filled thriller that dances between genres to create a distinctly ethereal mood.

"It oscillates between different tonalities and territories," explains director Lelio (48).

"It has some elements of a character study, Florence's character is in every scene.

"It has elements of suspense. At times, it has hints of even, like, horror. I think it's a lot of things.

"I like that ungraspable identity, an identity that is somehow in flux, which is something probably that is deeply connected also to the themes of the film.

"The solution Lib finds has to do precisely with changing your identity, or making it evolve, in order to reach new levels of freedom."

The normally bubbly, animated Pugh says she wanted to turn instead to stillness in her performance, keeping Lib's cards close to her chest as she unravels the secrets held by the O'Donnell family.

"First of all, when I read her on the page, I knew that I wanted to be very still with her. I've quite an animated face when I talk, when I chat to people, when I act, and I wanted her to be very... I wanted you to not know what it was that was going through her mind," she says.

"I love performances that are really still, so I tried to do that. And then when I got to it, I was like, 'This is impossible'. How could she be so still all the time when there's obviously so many things going on.

"And so every day everything was changing - these ideas that I'd had, that I had prepared, were changing.

Pugh adds: "I think shoots like that, especially over period pieces like this, are so much more exciting when you actually get to be these people. And I don't mean obviously, like eat gristle all day.

"But it breathes the sense of earthiness and realness into this world when you are able to just be in the elements. And there was no other way of doing it."

Being out in the fresh Irish air in Co Wicklow and capturing that pastoral essence was essential for Emma Donoghue (53), who wrote the novel on which the film is based and worked on the film's screenplay.

"There's a long, bad tradition of foreign companies coming to Ireland and just sort of using pretty backdrops and then not really using the actual talent available in Ireland, or getting things wrong, you know, things like accents," she says.

"So it was crucial to me that it really be part of the Irish film industry.

"And also, I have to say, if they'd filmed it somewhere else, I would have been sad, because these are the landscapes of my childhood, and there's nowhere quite like them. But I think Sebastian and [cinematographer] Ari Wegner have managed to make me see them new.

"I think a great mixture of Irish talent and an outside perspective has really made things quite fresh with this one."

Among the Irish talent in the film are Kila Lord Cassidy and her mum Elaine Cassidy, who take the roles of Anna O'Donnell and her mother Rosaleen.

"As an actor, you just want to work with brilliant actors, and it was so easy working with Kíla. At the time, we had 11 years of working on that bond," says Elaine Cassidy (42) of the maternal connection.

"It was a surprise, it happening, for me: Kila got cast first and had a Zoom with Sebastian, and he had asked her how she would feel if I was to play Rosaleen in the film.

"Thankfully, Kila was receptive to the idea, and open to it, and really excited by the prospect of that.

"It was so special – it's not something that can happen often. And, you know, the experiences we've had to date are going on holiday, and having nice photos taken..."

"And this time we have a movie," interjects 13-year-old Kila Lord Cassidy.

"It's something that we'll have forever – The Wonder's my baby now," adds the teenager.

"Being able to work with such brilliant people, and being able to have my mum play my mum... all this stuff is so rare, and I feel like it was just mixed into one amazing thing, an experience.

"I'm so happy that I got the chance to have that. It was amazing."

:: The Wonder is on Netflix from today.

Belfast Media Festival gets underway at The MAC