John McGahern, one of Ireland's most important writers, was in correspondence with many other writers throughout his life. A treasure trove of the letters he received from figures including Philip Roth, Ian McEwan, Hilary Mantel, Seamus Heaney and Michael McLaverty makes fascinating reading in its own right, writes Noel McAdam 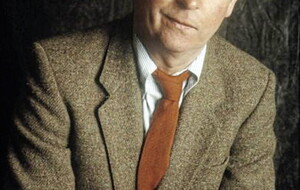 John McGahern is regarded as one of Ireland's finest writers. He died in 2006, and the letters written to him by other writers further highlight the esteem in which he was held.

FOR most of his life John McGahern lived a few miles across the border into Co Leitrim.

The border did not loom large in day-to-day living and the author would have been as likely to drive into Enniskillen as Carrick-on-Shannon.

But from his cottage base in Fenagh, McGahern was in touch with very many other writers, and not just his Irish counterparts.

Letters recently bequeathed by his widow Madeline reveal the creator of the classic novels Amongst Women and That They May Face the Rising Son was in contact with international novelists like John Updike, Philip Roth, Ian McEwan and Hilary Mantel.

Yet the treasure trove of correspondence also shows a network of links into the north, including Michael McLaverty, Michael and Edna Longley, Seamus Heaney and Brian Moore.

It is a remarkable insight into a private, formerly unseen, parallel world which the University of Galway, to which the letters have been handed over, is now allowing to be seen by the public.

The head of the project, Professor Barry Houlihan, commented when the correspondence was gifted to the university: "The letters sent to an author are less often anthologised, if at all, yet they offer a remarkable cross-section through the literary and personal networks, friendships and relationships that intersect with the literary and creative worlds."

Interviewed for The Irish News, he expands: "We as readers and scholars are used to seeking books of the collected letters of 'X', be it McGahern or whoever, and that gathers all the outgoing letters of a single writer.

"What seldom happens is a collected edition of letters sent to a writer, which complete the circles of conversation.

"This new tranche of letters allows us to do that for McGahern."

There are more than 1,000 of them and the collection also includes translators, editors, family members and friends.

It is just over a year since McGahern's letters were published in a massive tome, the work of Frank Shovlin, professor of Irish Literature in English in the Institute of Irish Studies at the University of Liverpool (Faber and Faber).

Professor Shovlin, who spent seven years compiling the mountain of material, told The Irish News: "I made the decision very early in the project not to include any letters 'to' McGahern, though I do occasionally quote from them in footnotes if I think it might help the reader with context.

"They are from a whole range of people, from neighbours to famous writers like Heaney and John Banville."

"This new tranche of inward letters, which shows another side of things, the conversations sent to an author, often unsolicited or not in response to something McGahern wrote, offer vital insights of those literary networks but also the readership," he says.

"There are hundreds of fan letters from readers of McGahern, and just from people who knew him once, were in school with him, or knew the places McGahern wrote about." (Many of them in Co Leitrim).

And he adds: "The collection is fully accessible on site at the University of Galway and the hope is now to see the collection become part of new studies and explorations of McGahern's readers and contacts."

Which brings us back to the border. For an American academic is already poring through the massive collection of letters in researching a project on McGahern and the border.

Among all his northern connections, on the far side of the border which would have loomed larger in the 1960s and 1970s when McGahern's first books The Barracks and The Dark were published, Houlihan believes the letters with Monaghan-born McLaverty are the most significant.

"At least those letters of exchange are by far the most voluminous across the northern writers I mentioned. (McLaverty moved to the Beechmount area of Belfast as a young child)

"McGahern was a young and emerging writer when first writing to McLaverty. They talked at length about literary likes and dislikes, influences, literary style, comments on McGahern's developing style - so I think McLaverty was the most significant of those connections."

In fact the correspondence between them was published separately in a book called Dear Mr McLaverty which shows McGahern just starting out and bold enough to seek the friendship of the older author, who died in 1992.

In that book, Linen Hall librarian John Killen summarised that while gifted writers, both McGahern and McLaverty viewed the craft of writing as a "difficult, onerous and, at times, exhausting experience"; it was something they felt compelled to do.

Replying to the very first letter McLaverty suggests several authors McGahern might like to read including short stories by Chekov, Tolstoy, Mary Lavin and Katherine Mansfield.

McGahern writes back to say that apart from Tolstoy's The Death of Ivan Ilyich, he has already read them all.

Prof Houlihan goes on: "In those early years McGahern is based in Dublin, so his 'sense of writing', physically at least, is coming from there, rather than being based back in Leitrim or Roscommon at Cootehall. I couldn't say off-hand if things like borders or the border came up."

Prof Houlihan said among the other most interesting letters are those from Michael and Edna Longley.

"McGahern visited both in Belfast in the 1970s and comments on that - as others do in reply, including the poet Richard Murphy who said the city in March 1972 'reminded me of London in the air raids, to look at the streets, most of them like mouths with bad teeth'.

"There are also letters here from Brian Friel, Paul Muldoon, Heaney and Moore," said Prof Houlihan. Many writers appear keen to visit the Leitrim landscape which is central to McGahern's novels, particularly early classics The Dark and The Barracks which were banned for a time and led to McGahern leaving teaching.

Among the most overt was Ian McEwan, for example, who wrote in 2006 stating he "would dearly love to come and see the land that lies around your imagination".

McGahern shared many of his own family correspondence, including intimate exchanges between his father and mother, in his 2005 book Memoir and seems largely to have lived a life in letters.

Books: The best reads to give this Christmas