When silence spoke volumes: Northern Ireland, the BBC, and Censorship in Thatcher's Britain

Robert Savage, director of Boston College's Irish Studies Programme, examines Margaret Thatcher's controversial - and counter-productive - broadcasting ban in his latest book, Northern Ireland, the BBC, and Censorship in Thatcher's Britain. It's an important contribution to understanding how the British government attempted to shape how the Troubles were presented to a global audience, says Dr Francis Costello 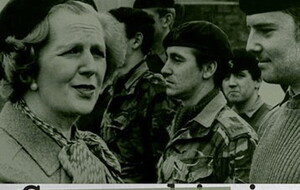 Northern Ireland, the BBC, and Censorship in Thatcher's Britain by Robert J. Savage

ROBERT Savage's well researched volume, Northern Ireland, the BBC, and Censorship in Thatcher's Britain, details how the Thatcher government sought to control the narrative of the Northern Ireland Troubles through manipulation of the British media by the use of censorship.

Savage's book follows upon his earlier effort The BBC's Irish Troubles: Television, Conflict and Northern Ireland which chronicled how the publicly funded BBC covered the Northern Ireland conflict through the television medium.

His latest volume skilfully and painstakingly draws upon a wide range of sources that have been become publicly accessible since his earlier work published in 2015.

Writing from the perspective of a professional historian, Savage shows how Mrs Thatcher sought to more positively present its Northern Ireland policy to the public while also manipulating how the British television media covered the Troubles during the turbulent decade of the 1980s in a Northern Ireland state beset by the combination of paramilitary and official violence.

Early on the author chronicles how the widespread revulsion shown toward Prime Minister Thatcher's hard line policy in 1981 against the republican hunger strikers abroad - especially in the United States - fuelled her desire to control the coverage of both the BBC and its independent counterpart ITV.

She did so on the pretext that the two were supinely facilitating the IRA's propaganda machine by conveying sympathetic imagery of the hunger strikers as they died, alongside favourable interviews of their supporters.

All of this, she contended, encouraged a wider level of interest by US network television and mainstream print editorialising against what they saw as an inhuman policy by her government.

Savage's books adds a fresh outside voice by someone also conversant with the medium of television news throughout the island of Ireland. Drawing from recently released papers, he sheds light on how the assent of John Hermon as Chief Constable of the Royal Ulster Constabulary in 1980 also drove the effort for the official imposition of censorship in an effort to thwart Sinn Féin's access to the broadcast media.

While the record shows that Hermon's efforts were resisted by some senior Northern Ireland Office officials as being both impractical as well as potentially damaging to Britain's image as a democracy in the international arena, the arrival of Margaret Thatcher as Prime Minister brought the drive to a higher gear.

Her hatred of the IRA and Sinn Féin was shown to be more than equal to that of Hermon's and was especially driven by the IRA's assassination of her close political ally Airey Neave in 1979.

Thatcher was determined to achieve her goal of censoring Sinn Féin no matter what hackles were raised against it. Her government also made much use of the Irish government's own ban on Sinn Féin's access to the public airwaves in the Republic.

By 1988 Douglas Hurd, as British Home Secretary, announced a directive that the BBC and ITV would be required "to refrain from broadcasting direct statements by representatives of organisations proscribed by Northern Ireland and Great Britain by representatives of Sinn Féin, Republican Sinn Féin and the UDA."

It is noteworthy while the UDA was covered under the government's directive, that loyalist paramilitary organisation - which had spent the two previous decades directing a random murder campaign against the Catholic population - was actually not outlawed until 1992, only two years before it followed the IRA in declaring a formal ceasefire in 1994.

While the government's ban became a reality, Savage provides a useful glimpse of the internal exchanges between the NIO and Thatcher leading up to it about whether the order would actually rein-in Sinn Féin.

He cites how one senior official argued that denying "such articulate Sinn Féin spokesmen such as Danny Morrison" the chance to "wipe the floor with their less articulate opponents" would do little to end the conflict.

Instead he contended it was more likely to discourage "more constitutional activities including public debate".

It is indeed wistful that those "more constitutional activities" would indeed be thwarted until six years later when the ban was lifted by the government following the IRA's 1994 ceasefire and the actual voices of Sinn Féin representatives could be heard on television and radio.

That it begs the question of whether the conflict could have been brought to an end sooner to the chagrin of the securocrats in the UK government among others is bolstered by the remark of the late Ulster Unionist Party leader James Molyneaux that, "A prolonged IRA ceasefire could be the most destabilising thing to happen to unionism since partition."

:: Dr Francis Costello is the author of The Irish Revolution and Its Aftermath: 1916-1923 as well as books on Terence MacSwiney and Michael Collins.

:: Northern Ireland, the BBC, and Censorship in Thatcher's Britain by Robert J. Savage is published by Oxford University Press, 2022.