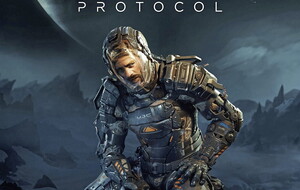 The Callisto Protocol (Multi)
By: Krafton

WE'RE sick to the back teeth of the P-word round these parts, but this spiritual successor to the decade-dormant Dead Space franchise is at least one protocol we can all get behind.

When one last job goes south for Josh Duhamel's grizzled space trucker Jacob Lee, he crash-lands on Jupiter's second-largest moon, only to be banged up in its Black Iron Prison. Before he even has a chance to drop the soap, the lunar clink is soon overrun by con-hungry mutants.

If imitation is the sincerest form of flattery, noughties nightmare Dead Space must be blushing like a bride. Callisto Protocol plays out like a next-gen tribute act, with everything from its inventory system, gravity-bending glove and signature stomp pilfered from EA's blockbuster franchise.

It's hardly surprising, given both games share a director in Glen Schofield. Yet if Dead Space looked to Kubrick for inspiration, Callisto is pure Stallone. You're still hoofing it through industrial sci-fi corridors, facing off against creatures that look like they were assembled from the contents of Moy Park's bins, but Callisto is strictly an A to B affair, with little to be gained for going off-piste.

However, there's nothing wrong with popcorn – and Callisto's corn is poppin'. Billed as a horror, it's more Doom than Resident Evil as Jacob Shawshanks his way through sewer tunnels and claustrophobic, industrial corridors ripe with baddies who leap from vents like angry janitors.

There's no map and no torch as you'll barely need them, though a thin veneer of strategy involves weapon upgrades, unlocked by spending credits rummaged from chests, corpses and by selling prison contraband.

With the emphasis on meaty melee attacks, Jacob's arsenal of pistols and shotguns merely complement the face-smashing with a prison baton – an up-close-and-personal approach that borrows dodge mechanics straight from the boxing ring. Yet, rather than floating like a butterfly and stinging like a bee, you'll lumber around like an extra from Thriller, with arthritic, unresponsive controls that make success a crapshoot.

If you can put up with the loose combat, there's a laser-focused 10 hours of terror here – and gaming gore has rarely looked so good.

With never a dull moment in its brief run-time, if anything, Callisto's mushy moon-based monster mash offers a tantalising glimpse of what we can expect when the official Dead Space re-make lands on the new console crop in January.