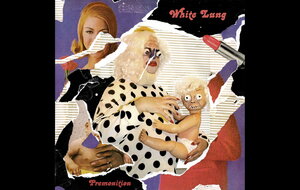 FROM the dancey Put A Light On Me and energetic Tiny Riot to the slow tempo All The Way Over and Michael Buble-esque This Time, Eurovision-winner Sam Ryder showcases his impressive vocals.

Still, the standout track is lead single Space Man. The TikTok star was chosen to represent the UK at this year's contest and had the perfect pop song.

In his sparkling jumpsuit, aided by epic lighting and staging, Ryder gave the performance of a lifetime and secured second place.

Characterised by a catchy chorus and his impressive falsetto, the track is surely a contender for one of the best pop songs of 2022.

Ryder deserves every ounce of his newfound fame and his future is looking bright.

Although the rest of the tracks here don't (and, frankly, can't) compare to Space Man, there is not one weak piece on a debut album that is out of this world.

PREMONITION is the fifth and final album from the Canadian punk rockers, and it shows.

There is a leave-it-all-on-the table energy as frontwoman Mish Barber-Way delivers lyrics about motherhood, rebirth and the messed up state of the world.

The band's riffs still hit hard, but also manage to be tender, evocative and melodious.

White Lung have been on a kind of hiatus since 2017 when they started on the record: Barber-Way became pregnant with her first, and then second, child, and work was delayed.

The untamed energy of previous records has given way to something more mature.

Premonition is perhaps their most personal, intimate album yet, and a fine ending for a band that burnt brightly.

VOICE OF THE BEEHIVE – LET IT BEE

VOICE of The Beehive's Tracey and Melissa used to get annoyed when their debut album was compared with The Bangles but listening almost 35 years later, the comparison sounds right.

The two sisters from California were joined by a London backing band including Woody from Madness and produced an album teeming with guitar hooks and sparkling pop melodies. There is so much life and verve throughout the entire record, it sounds like a lost classic and has aged well.

Top 40 hits, I Say Nothing and Don't Call Me Baby, could have been hits in any decade since the fifties and should be staples on any 80s Hits shows today. The Beat Of Love and There's A Barbarian In My Car' show a punkier style both with some real acerbic humour.

The album finishes with Just A City, the best song about London this side of Rainy Night In Soho.

Most songs on both discs are worth listening to, but you may need to forgive the post-punk pop legends for occasionally steering away from their classic sound.

The bonus tracks are the revelation here, though – an explosive rush of soaring guitar music punctuated by Ian McCulloch's inimitable voice dripping with haunting edginess.

Fans will appreciate the climatic and brooding Nothing Lasts Forever, featuring Liam Gallagher on backing vocals and tambourine shakes.

Bunnymen disciples will claim that Evergreen reaches the heart of the band's rousing melodies with tracks like Forgiven and Don't Let It Get You Down, as on disc 2, The Killing Moon lulls and swoons in full Echo broodiness in rare bonus materials.