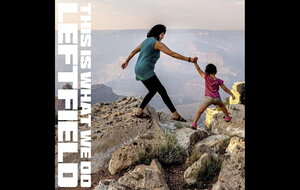 Leftfield - This Is What We Do

STORMZY – THIS IS WHAT I MEAN

STORMZY seems invincible at the moment. Everything he touches turns to gold. However, his new album is the Croydon rapper's most intimate and vulnerable so far.

Yes, there is posturing, including on its title track where he proclaims he is "Kanye mixed with Donny Hathaway". There are attacks on music industry racism. There is even an oblique reference to Stormzy's beef with fellow grime star Wiley.

Mostly, however, This Is What I Mean is an introverted affair occupied with heartbreak and faith, both themes on his previous records but here given an even more thoughtful and mature handling.

More than ever before, Stormzy retreats to his keyboard, surrounding himself mainly with gospel choirs, strings and brass sections to dig deep into his psyche: this results in excoriating self-analysis on Bad Blood, and the quest for personal strength in the face of discrimination on I Found My Smile.

Another step forward for an artist on a seemingly unstoppable hot streak.

LEFTFIELD – THIS IS WHAT WE DO

THERE'S a new energy in the latest album from pioneering electronic outfit Leftfield. Accumulator and Making A Difference both shudder with forward energy, while Full Way Round, featuring the voice of Fontaines DC frontman Grian Chatten, gyrates around a breakbeat which sounds like it was carved from a lightning bolt.

This Is What We Do is the first album in seven years from founder Neil Barnes, and Adam Wren, who replaced original member Paul Daley in 2010 when the band reactivated.

The big room techno on display here has found itself back in fashion recently with the likes of Bicep finding mainstream success.

And Barnes and Wren are certainly not scared of revisiting their past – poet Lemn Sissay features on Making A Difference nearly three decades after appearing on their 1995 debut.

But there is a new impetus this time, a spontaneity that makes this one of their stand-out releases.

THE seventh album from Olly Murs is an ode to his fiancee, bodybuilder Amelia Tank. These 11 tracks see him leaning back into the reggae-tinged pop that has served him so well since his 2011 smash hit Heart Skips A Beat.

From the light-hearted '80s vibe on Go Ghost to the thumping disco of Best Night Of Your Life, energy levels remain high, although you hope the latter song's posturing lyrics are meant as tongue-in-cheek.

Murs enlisted songwriting duo David Stewart and Jessica Agomba, behind hits for K-pop superstars BTS, for the album and they bring a dynamic feel to proceedings.

I Found Her is perhaps the most on the chin of the lot, an out-and-out tribute to his future wife, who he met in 2019. It's sweet if a little overblown.

Marry Me is a mixed bag, full of character and energy but often lacking in musical ideas. Either way, it's sure to be a hit.

THE ever prolific Neil Young continues his hot streak of releases, from studio albums to rare recordings from his archive.

This time it's a full-length effort with his long-standing band, produced with Rick Rubin at Shangri-La studios.

Young largely puts his guitar to one side, instead turning to the keyboard and organ for a deeper, looser, more ragged sound.

There is a first-take feel to many of the tracks, as if Crazy Horse are learning their intricacies as they play.

To his credit, Rubin lets this happen and the result is a rawness to Young's vocals as he delivers angry sermons on the environment and other modern social ills.

World Record is a solid collection full of passion, although nothing we haven't seen before from the veteran performer.