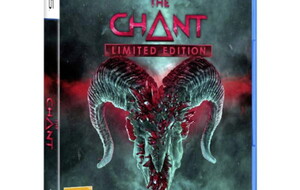 SAY what you like about Lough Derg, at least you're only fighting off hunger and athlete's foot. Not so for the spiritual seekers of The Chant, where things quickly go Pete Tong among the crystals and robes.

Canadian studio Brass Token's debut is a hallucinogenic head-trip straight out of the pages of HP Lovecraft, leaning into cosmic horror – the meeting point of religion, sci-fi and gloopy creatures.

It's a tough genre to get right, though many have tried with varying success: from Amnesia to Call of Cthulhu, they tend to be lower budget affairs. Yet, while anyone can knock up some trippy nonsense with a few tentacles, The Chant belies its humble roots more than most.

Following Jess Briars on her trip to the Prismic Science spiritual retreat, it turns out Glory Island hides a sinister secret, and more Crystals than a strip-club. When the mushroom tea gets a-brewing, a dimension called The Gloom begins barfing out its psychedelic horrors.

The island is puckered with creepy locales, from a cannery to its derelict lighthouse, all bursting with otherworldly nasties. Unlike many indie horrors, The Chant boasts full-fat combat and an open world to explore as Jess takes on supernatural beings and possessed cultists, all the while fleeing her deceased sister, who takes the form of a swarm of flies.

Areas are hedged off by unique colours, accessible only with the corresponding crystal, while combat is like nothing you've ever experienced. Laced with trippy dread, finding the most effective weapon combo is the key to success, but rather than shotguns and knives, your arsenal of salt, oil and herbs is the kind of thing you'd normally shove up a roast chicken's backside.

Further breaking the horror mould, players must juggle three key stats of spirit, body and mind, with Jess going doolally if left in the dark too long.

The Chant's stick-swinging combat can be a pain in the chakras, though, and bar the lead, its acting is a mixed bag, making the horror more hammy than Hammer.

Even if its journey is a little sluggish along the way, The Chant is just the cup of mushroom tea for fans of out-there horrors such as Annihilation or Nic Cage freak-out Color Out of Space, delivering a primordial romp that'll have you soiling your yoga pants.