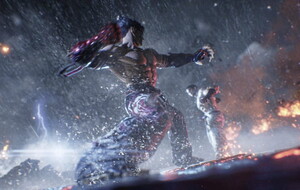 ARMCHAIR brawlers rejoice – Tekken is back. Nope, Liam Neeson hasn't dusted off his pensionable fists for another revenge flick, but Tekken 8 still promises enough beatdowns to test even the skills of Ballymena's finest.

The original Tekken entered the ring in 1994, during the fighting genre's awkward 3D adolescence, and boy has it aged badly, with characters that look like they were made out of lunchboxes. Still, the series has been hoovering up Yen ever since.

It's been seven long years since Namco's venerable coin-guzzler last landed in arcades, with a console port two years later. And, with little-to-no fanfare, the reveal of Tekken 8 at Sony's recent State of Play event stole the show.

The chess of beat 'em ups, Tekken's magic has always been in its Zen-like gameplay where your arsenal of moves and their timings had better be down pat. Sadly ironic, then, that for the series' original fans – myself included – the twin demands of reflexes and memory are now shot.

Unlike Street Fighter and its ilk, Tekken lets players tailor their man-mountain's style – whether it's all-out attack, sneaky counters or throws, though, of course, noobs can still always hand you your backside just by button-mashing.

Shot through with melodramatic storylines, Tekken boils down to bish-bash action, evoking real-world fighting styles without taking things too seriously. Its flurry of Japanese wackiness has included a cast of weird 'n' wonderful combatants – kangaroos, pandas and the like – that toss realism to the wind.

At Sony's State of Play, a few minutes of in-game footage whet appetites in a trailer that saw series vets Jin Kazama and Kazuya Mishima knocking seven shades out of one another in the rain. And, while we can expect characters old and new, we're in the dark for now on all but those two combatants.

The fighting talk is that Namco are taking a back-to-basics approach, and running at 60fps on PS5 with lashings of busy background elements, it looks suitably gorgeous. It won't be a PS5 exclusive, though, with Xbox and PC owners getting in on the action – and, with no PS4 or Xbox One versions planned, Tekken 8 is set to be a fully next-gen slap-around.

There's still no release window, with the trailer simply ending on a "Stay Tuned" message, though it's a fair bet we'll see the return of the King (of the Iron Fist) next year.