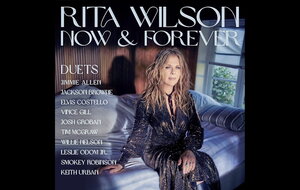 YEAH YEAH YEAHS – COOL IT DOWN

BACK after nine years on hiatus, Yeah Yeah Yeahs sound huge on their mesmerising new album.

Cool It Down, only their fifth album, is a long way from their original garage rock, with washes of synths and beats replacing the howling guitars of old.

Epic opener Spitting Off The Edge Of The World features Perfume Genius, with singer Karen O warning "cowards, here's the sun, so bow your heads", with the instrumentation falling away before a wall of synths crashes back in.

Second track Lovebomb is a slow burner, while Wolf starts with Karen O singing "I'm hungry like the wolf", not necessarily a reference to the Duran Duran song, although it has a glistening 1980s sheen.

That decade's influence continues with the dancefloor-friendly Fleez, with lyrics about dancing to cult NYC band ESG.

AS AN actress, singer, writer and prominent philanthropist alongside her husband Tom Hanks, range seems to be a defining theme in Rita Wilson's career.

This collection of 70s duets seems tailormade to show off exactly that. Where Is The Love with Smokey Robinson brings out the vulnerability in her voice, while her back-and-forth with Keith Urban on a soulful version of Crazy Love is a match made in heaven.

Fire with Elvis Costello, though, is a missed opportunity: a little more character and passion would have been much appreciated. Wilson is more at home on the tender version of Songbird she shares with Josh Groban, who brings his usual melodrama to proceedings.

It's to be expected on such a diverse and starry album that there would be both hits and misses.

But the highs on Now & Forever: Duets make this thoroughly enjoyable listen.

JAZZ pianist Chick Corea is the latest addition to the Montreux Years series, which selects an artist's greatest performances at the legendary Swiss music festival for remaster and re-release.

This collections spans 29 years from 1981 to 2010, and contains a huge range of material from the famously diverse jazz fusion maestro, who won 27 Grammys before his death last year aged 79.

Corea is joined by a roll-call of collaborators including bassist Gary Peacock and the Bavarian Chamber Philharmonic Orchestra.

His 1981 version of Thelonious Monk's Trinkle, Trinkle adds a personal touch while paying tribute to the classic version featuring John Coltrane, while his 2010 performance of his composition Bud Powell is a fiery, dynamic one.

A nice moment comes on the song Interlude, from a 2004 performance with his Elektric Band, where Corea engages in a call-and-response segment with the Montreux audience.

ON THEIR fifth album, Aussie pop-rockers 5 Seconds of Summer deliver easy listening but nothing groundbreaking.

5SOS5 opens with strong energy in its lead single, Complete Mess. This vigour continues throughout the tracklist: Me, Myself & I is intensely catchy, while Blender delivers fun set to a fast pace.

There are also some calmer, more emotional moments, like Luke Hemmings' melodic falsetto on Easy For You To Say and Older, a sweet duet with Sierra Deaton about the fears of growing up.

There are intriguing sounds to be heard on the likes of Haze and Caramel, the latter of which is somewhat dreamy.

Despite these positives, the album feels overloaded. A more concise record with less filler would have allowed the gems to shine through – but this should not take any credit away from the stronger tracks, which do offer some merit.