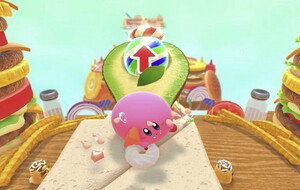 IN MANY ways, Fall Guys was the battle royale that Nintendo never made, with 60 jellybean characters hoofing it through It's a Knockout-style stages. The goofy party game is still going strong, with over 50 million players since going free-to-play on consoles earlier this year.

Undeterred, Nintendo has decided to get a slice of the action, channelling said multiplayer larks through its most overlooked mascot. The Ringo Starr of Nintendo's franchise Fab Four, Kirby has forever wilted in the shadow of Mario, Zelda and Pokemon since his Game Boy debut in 1992.

Thirty years on, and the walking whoopee cushion has finally found his groove, with the charm offensive that was this year's fully 3D Forgotten Land followed up by a surprise chaser, Dream Buffet. A spin-off – or rather roll-off – from the mainline series, could this be Fall Guys for the Nintendo set?

A Kirby battle royale, Dream Buffet has our pink puffball rolling about levels like an escaped bladder, munching on strawberries and assorted deserts to add unsightly pounds. With courses composed of waffles, burgers, ice cream and the like, players gobble up strawberries en route to the flag, each increasing our hero's girth, in turn making him roll faster and ensuring the final weigh-in tips the scales in your favour.

Part Fall Guys, part Monkey Ball, all Kirby, the roly-poly racing boasts Mario Kart-style item boxes containing food-based abilities, from fiery chilli turbo boosts to ice-cream tornadoes, though the obesity-tastic premise remains simple – get as fat as you can as you roll at speed through treat-tarnished tracks.

Like most games of its ilk, Dream Buffet comes alive with a few mates in tow, and the multiplayer options include two players on the one console, four locally or an unlimited online cast.

Races and mini-games festoon winners with unlockable treats, which range from stickers and costumes to new soundtracks.

Reaching out to the youngest common denominator, Dream Buffet won't tear the Fall Guys faithful away from their jellybean jollies, but at a recession-busting £13.49, Kirby kooks will be tickled pink with its candy-floss visuals and saccharine-sweet gameplay stuffed with swollen pink balls.