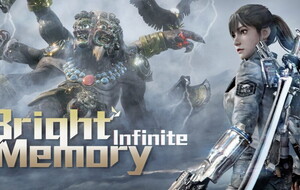 WHILE there have been plenty of indie games developed by a single person, they tend to look exactly that, with lashings of heart and creativity making up for obvious technical limitations.

Not so for Bright Memory, a one-man-band project from Chinese developer Zeng Xian Cheng, known professionally as FYQD. Putting in the kind of shift that makes it inevitable all our jobs will be outsourced to Asia, Bright Memory's lush mix of gun and swordplay puts many a big studio effort to shame.

Set in 2036, players star as Shelia Tan (not to be confused with Australian after-sun lotion, Sheila Tan), with our little China girl tearing her way through a stream of tooled-up super-soldiers and time travelling warriors on a quest to stop a black hole from destroying the world.

To be fair, the plot and dialogue are so nonsensical, they needn't have bothered translating them. What Bright Memory has in spades, though, is a sweet mix of blasting and swordplay that keeps doling out new tricks and gameplay candy.

With an awesome array of tools at your disposal, you can upgrade Shelia's arsenal and adapt to new environments with parkour skills as you take out the trash on foot, in cars or even during a memorable shoot-out on the wings of a plane.

Boasting eye candy with all the trimmings, Bright Memory can be played in 4K and even throws in ray tracing on capable hardware. At around three hours long, it's more Bright Memory: Finite, but at £15 you can't baulk at its cheap as (curry) chips asking price.

When one Chinese developer can accomplish this on their own, I shudder to think how we'll cope if their military boots end up at the end of the street.

WITH Hollywood's hunger for videogame adaptations as ravenous as Pac-Man, it's fitting that Namco's big-gobbed blob is the next arcade icon to get the silver screen treatment.

Based on an original idea by Chuck Williams, producer on 2020's Sonic the Hedgehog movie, Pac-Man will follow a similar live-action route to the big screen – though it's anyone's guess how they'll adapt the tale of a yellow circle who turns ghosts into floating eyeballs.

He may be gaming's greatest icon, but it's been a long time since Pac-Man's early-80s pomp, when the iconic coin-waster graced the cover of Time Magazine and Pac-Man Fever entered the US charts.

Pac's never really gone away, though – popping up in everything from Futurama and Wreck-It Ralph to 2015's god-awful Pixels movie. But if you can't wait to watch a film about two-dimensional characters gobbling pills set to repetitive electronic music, there's always 1999's Human Traffic.