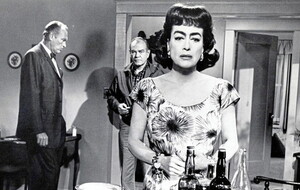 NO-ONE could sell a film quite like producer-director William Castle. If it meant putting some extra bums on cinema seats, there was no gimmick too cheap or sensationalist for the self-styled king of the American B-movie.

From wiring up cinema seats to vibrate at key horror moments in the 1959 Vincent Price shocker The Tingler to providing a preposterous "fright break" for cowardly patrons unable to sit through his shameless Psycho rip-off Homicidal (1961), Castle did it all.

However, for his 1964 film Strait-Jacket, the director had his ultimate gimmick and unique selling point: Joan Crawford as an axe wielding maniac.

Crawford plays Lucy Harbin, a farm owner who returns to her homestead early one night to find her husband Frank (Lee Majors) in bed with his mistress while her innocent daughter lies sleeping in an adjacent bedroom.

Driven insane by the vision of infidelity she witnesses, Lucy picks up a handily positioned axe and proceeds to bludgeon her husband to death, decapitating him in the process. All this happens in full view of the daughter who watches as her mother is eventually led away to a secure mental facility.

Two decades later, Lucy is released back into the care of her now fully grown daughter Carol (Diane Baker) who is making a life for herself in her mother's old home. Problem is, Lucy keeps getting flashbacks to that bloody night 20 years previously and all the axes lying around the farm don't exactly help keep her on an even mental keel.

There's also Leo (played by the great George Kennedy), a creepy farmhand, to consider, and as the fresh bodies begin to pile up the locals begin to believe that Lucy is up to her old beheading tricks once again.

In many ways Strait-Jacket is, despite the pulpy subject matter, one of Castle's most prestigious productions. Made for Columbia with Psycho author Robert Bloch on board to provide the screenplay, this was a step above the more blatantly B-movie material he normally peddled. Adding the imperious Joan Crawford to such a box office baiting concoction is merely the icing on the cake.

The actress was enjoying a commercial re-birth after the gothic madness of Whatever Happened To Baby Jane? and plays her meaty part here with absolute conviction, milking every mad moment on screen for all it's worth.

She applies the same melodramatic magnetism she brought to more respected films such as Mildred Pierce and adds a little horror hokum to the mix with a Tinsel Town charm that's all her own.

Fast-paced and fun from the off, this offers some edgy horror effects for the time – the constant chopping of axes and the brutal murder scenes are still effective in a crazy kind of way – and never lets up until the frankly insane climax leaves you reeling and asking yourself "did I really just see that?".

A masterpiece of William Castle hard sell and a fabulous late-period turn from Joan Collins make Strait-Jacket the perfect fit for a Friday night cult classic.