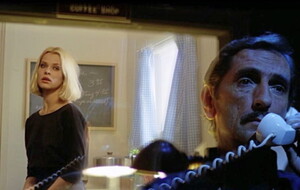 TIME stands still when I watch Paris, Texas. It has that strange, mysterious allure that all great art does.

There's the look – the sun-baked desert of the Lone Star state never looks so effortlessly iconic as it does through director Wim Wenders' vision and cinematographer Robby Muller's view finder here.

There's the sound – the lonesome rattle of Ry Cooder's slide guitar that wails away throughout has never been bettered.

And, of course, there's the central performance of Harry Dean Stanton as the jaded drifter at the story's fractured heart to savour. His turn as the ragged-trousered Travis, making his way through the dusty desert as he tries to make sense of his traumatised life and re-connect with his family and roots, made the eternal bit part player a star at 58. It remains a peerless performance from an astonishing actor.

As a purely cinematic experience, the 1984 film tugs and lures you into its world and its themes and threads of loneliness, family and the great American dream weave their way deep into your subconscious. Get a taste for it and you'll be addicted for life.

We first see Travis wandering alone through the Texas wilderness before he is finally picked up by his brother Walt, a typically enigmatic performance from the late Dean Stockwell, who's been looking after his traumatised brother's infant child Hunter since Travis and his young wife Jane (Nastassja Kinski) mysteriously vanished four years previously.

Walt takes Travis into his LA home and he slowly reveals his plans to get back to the Texas town he grew up in and get his family life back on track. Travis and Walt then set out on a road trip to Houston where Jane is now living and working in a sleazy peep show.

Every single frame of Paris, Texas, showing now as part of the QFT's season of the director's films, feels like a masterclass in movie making. Both LA and Texas shimmer in the blinking neon signs of low rent motels and the ever-present background echo of shattered dreams is never far from the surface.

The script, co-written by Wenders with Sam Shepard and LM Kit Carson, is heartfelt and true and the difficult denouement that rejects the obvious schmaltzy possibilities offered for reunion and renewal is truly devastating.

Everyone on screen, from Stockwell to Kinski and Aurore Clement, who plays Walt's French wife Anne, is mesmerising in their own way but Stanton is simply electric. It's impossible to take your eyes of his sad, haunted face as he faces off the loneliness and disappointment that life has served him up. If future historians ever need one face to represent the death of the traditional American dream and the downbeat reality that lurks behind it then the weather beaten visage of Travis is waiting for them.

It goes without saying, really, that the best way to immerse yourself in this slice of cinematic perfection is to see it on the big screen – so get along to the QFT on Monday and Wednesday for its final two screenings.

Trust me, you won't be disappointed.