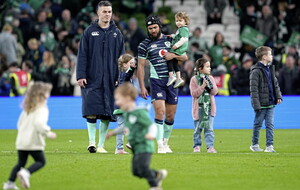 As Ireland continue to evolve under Andy Farrell's watch, Saturday's 19-16 win over South Africa presented him and his backroom team an opportunity to assess how far they have progressed under his watch.

Much has been made about last summer's tour to New Zealand and the importance of a first series win. But the Springboks present a different challenge.

Bringing to the table a power game and a physicality that few can rival, this was a test match in every sense of the word.

Over the last 12 months Ireland have brought their attacking play to new heights but question marks remain over their ability to contain bigger and more imposing packs.

Head coach Andy Farrell wanted a different test and that is exactly what he got. It was an opportunity to gauge where his troops are as well as getting a feel of what to expect in Paris next year at the world cup.

When asked what he thought he learnt about his side from Saturday evenings test match Farrell said, "A lot!

"We've got resilience, we've got guts, character if that's what that is as well.

"We wanted the test. We wanted the different type of test match that was a proper old fashioned slinging match to see where we are at in that regard.

"I thought the character of the side was immense. For all sorts of reasons.

"Having said that South Africa are a hell of a side. It was a hell of a test match that could've gone either way. So, the character that we showed was fitting for the twelve days that we've had together and the injuries that we have had," continued Farrell.

Farrell also expressed his delight for two members of his playing squad.

As Conor Murray became the 8th member of the 100-cap club, Leinster back Jimmy O'Brien was earning his first.

"There's a bit of relief to get the victory but we're delighted in the changing room for Conor and Jimmy.

"We make a lot of that type of stuff and we are unbelievably privileged to be part of the Irish set-up when things like this happen.

"For us to be able to get Conor's family and Jimmy's family in during the week, you know it's great for us all to be part of and we are so pleased to get over the line to make it extra special for them as well," said Farrell.

It was a remarkable introduction for O'Brien. Coming into the action as early as the 27th minute for the injured Stuart McCloskey, the Leinster utility back admitted to being a little surprised when he got the call to go in.

"First half, I thought there was no way they would put me on, I thought they'd bring Joey (Carbery) on and get Johnny to cover 12," said a shocked but surprised O'Brien.

Originally named to start on the wing for Ireland A on Friday night, O'Brien came into the reckoning after Robbie Henshaw's withdrawal to injury. But after being informed by Farrell that he was also going to be covering centre, he sought out some advice from teammate Garry Ringrose.

"Last night I sat down with Garry on the off chance I was going to cover 13. Faz (Farrell) told me I was covering 13 so that was so helpful, but I played my first 10, 15 caps for Leinster at 13 so it wasn't too alien, just haven't played there in a while."

On the result a delighted O'Brien said, "We had to grind out this win today. We probably tried to protect the lead a bit too much if we're being honest with ourselves. We probably could have played a bit more rugby, but these are learnings you have to take from the game.

"South Africa obviously played a bit more expansive in that second half, tested us and played very well, but it was a seriously tough game."