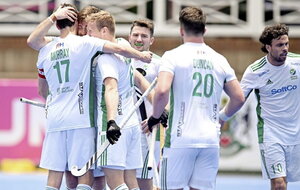 Ireland made it two wins from two in the FIH Men's Hockey Nations Cup when they came from behind to beat Pakistan 3-1.

With less than 24 hours to recover after their opening match against France, Mark Tumilty's team started a little slowly in the heat in Potchefstroom, South Africa. Pakistan went in front in the first minute of the second quarter and it was the wake-up call Ireland needed as they hit back almost immediately through Conor Empey.

Ireland captain Sean Murray was the catalyst for the goal; he took a quick free and found Jeremy Duncan in the circle who passed first time to Empey who had the final touch.

Ireland came out with renewed impetus in the second half with several chances in the first few minutes, including, arguably, the play of the game.

Kyle Marshall found Murray who passed first time to Empey in the circle, who squared immediately for player of the match Benjamin Walker. The speed of the move was what unlocked the Pakistan defence and gave Ireland the lead. Pakistan continued to threaten, their one-on-one skills particularly impressive when in the final third of the pitch.

The third quarter was end to end as both teams drew saves from their opposition goalkeepers. James Milliken was between the posts for the men in green, as Tumilty opted to rotate his keepers. Ireland retained their narrow lead going into the final quarter, and they showed their experience in the final stages, winning two more penalty corners, the second of which Shane O'Donoghue converted when he flicked home past the player on the right post to give Ireland some breathing room.

Not content to play the game out, Ireland continued to push and had chances to widen the gap but were unable to find the mark. Pakistan won a corner late on and a goal could have made the finishing stages interesting by reducing their deficit, but the shot went wide and Ireland closed out the match to win comfortably by three goals to one.

Head coach Mark Tumilty was happy with how the match went: "I'm pleased with the result today. It was always going to be a tough challenge coming off the back of the France game and Pakistan offered something unknown to us.

"I'm delighted that we executed a penalty corner late on to get us a bit more comfortable towards the end. I thought that at times we played some really good hockey, and at other times it wasn't so good but the second goal was a fantastic team goal which was really pleasing because it's something we have worked on this past number of months. So, more progress was made with the group and we build towards the game with South Africa on Thursday."

Player of the match Ben Walker felt the team still has more to give. "We responded well to going one goal behind, we equalised quite quickly. But there are maybe still some things we need to work on. We obviously have a rest day and we know we probably need a result on Thursday to guarantee progression to the semi-final so we are focused on that now," he said.

Ireland's final group game is on Thursday at 1pm when they face hosts South Africa. The top two teams in the group of four move on to the semi-finals on Saturday.