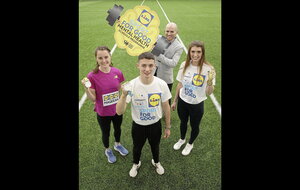 Rhys McClenaghan is an ambassador for Lidl

OLYMPIC gymnast Rhys McClenaghan says he wouldn’t change the ruthless fine lines of his chosen sport as he eyes a medal at next month’s world championships in Liverpool.

The Newtownards native and team-mate Eamon Montgomery both claimed gold at last week’s Paris World Cup, a tune-up competition for the worlds.

The 23-year-old captured the hearts of Irish and British fans during the Tokyo Olympics when he made an error in the Pommel Horse final that cost him a medal.

The 2018 Commonwealth and European gold medallist also faltered in last summer’s Commonwealth Games in Birmingham but still nabbed silver in the Pommel Horse final, but didn’t make the podium cut at the Euros in Munich soon afterwards.

Speaking at Lidl’s Sport for Good programme, the affable Co Down man has taken this year’s hits in his stride and still loves gymnastics more than ever.

“I love what I do,” said McClenaghan.

“I don’t think it’s possible to be successful, or at least being happy, in this sport without enjoying what you do. I love gymnastics, I love the travelling to Dublin to the gym, I love competing, I love training, I love the hard days, I love the good days. I feel like that’s what’s brought me to this point in this sport. It would be a horrible road if I didn’t enjoy this sport, but I do. I love it to bits.

“If I wasn’t doing sport, I wouldn’t be doing good in life. I really struggled with school work. Going to the gymnastics centre for four hours after school every day probably didn’t help my school-work but at the same time it was my escape from school.

“I even look back at school and I know that I didn’t enjoy it at all. I’m glad that I’ve left school and I’m doing a job that I absolutely love. If gymnastics wasn’t there? I don’t know what I’d be doing.”

McClenaghan hopes to return to the Olympics stage in Paris next year to right the wrongs of Tokyo but he won’t change his happy-go-lucky approach to his sporting discipline.

He enjoys making YouTube videos about his latest sporting travails.

“I’ve seen a lot of gymnasts taking life, taking their sport, too seriously. The way I do my best gymnastics in training is when I’m in that kind of playful mode – and that’s when you learn the most as well, as well as just being a happy athlete.

“A happy athlete performs the best gymnastics. That’s what my coach says. I like to be playful, it keeps the mood positive, it keeps it high-energy and gets the best out of me.”

McClenaghan described some of his routines at this summer’s Commonwealths and European Championships as “just messy” but his World Cup gold medal in Paris last week was a timely boost.

“We’ve learned from the mistakes we made [at the Commonwealths and Euros],” he said.

“The routines we’re doing now are more consistent and way more solid and that’s what’s going to win medals in gymnastics, that consistency.

“There are judges writing down every single thing, if there’s a leg bend... You make the comparison with football. You miss a pass and you reset, you’ve a goalkeeper to back you up.

“If I miss the equivalent of a pass in a routine, the judges are looking and writing deductions down on a piece of paper. And that’s going to affect the score. Even what happened in the Olympics final, one finger mishit the handle and that was the momentum gone.

“Some mistakes like that [in the Tokyo Olympics] you can almost not learn from them and you say: ‘That’s just gymnastics, that’s just sport.’ We’ve all seen those freak accidents in sport – ‘How did that guy fall? How did that guy miss a shot?’ Everybody’s got their weaknesses, everybody has their downfalls in sport.

“Nobody does a perfect run in sport. I feel like that was the thing I took away from Tokyo. Perfection in life and in sport is unattainable but it doesn’t mean you can strive for it.

“Floyd Mayweather has got punched in the face a bunch of times but his record is pretty good though.”