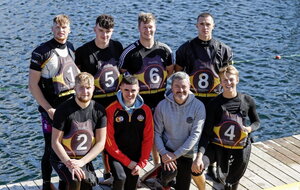 Following their impressive performance at the European Canoe Polo Championships in Belfast last weekend, the Ulster Canoe Club is seeking to grow its squad to boost the team's competitive chances in the future.

The Ulster squad placed 13th out of 27 teams from across Europe, who travelled to compete at the high-profile event at Belfast's Let's Go Hydro resort. This represents a significant improvement following a 15th place finish in 2021 and 17th place in 2020. The team is now focused on recruiting new talent, working towards a top 10 finish in Spain next year.

Boyle said: "The team put in a solid performance against Europe's top teams, and as the youngest squad in the competition this was no mean feat. We are seeking to open up the sport to more young people, to grow our community of young canoe polo athletes and bolster Ulster's future chances for sporting success."

The Belfast Kayak Academy trains at Let's Go Hydro resort in Carryduff and is currently recruiting 10-16-year-olds to try out. To find out more, email, info@letsgohydro.com