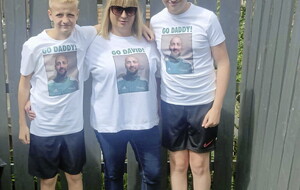 HIS body ached every time he moved. Ankles, hamstrings, back… Muscles that hadn’t moved in years cried out together in pain.

But he was happy.

David Gourley had played four games for Northern Ireland in the Transplant Games in Leeds. Four games in one day! That’s not bad going by any standard but for someone who never thought he’d play football again it’s amazing.

David was always a keen player. For years he grabbed his boots on a Friday night, said his goodbyes, thrown his bag into the back of the car and got away for a game of football.

A good first touch, a few nice passes and maybe a goal or two and he’d be happy but more importantly football was valuable head space, a bit of craic with his mates and, at the end, three quid a head into the pot for the Christmas do.

He took it all for granted until the moment that changed his life forever.

It was 2019 and he was 34 when he began to suffer from cramps. The Newtonabbey native fell into the male trap of trying to wish it all away but after six months of being struck down with pain in both legs the penny eventually dropped.

He went to see his doctor but assumed he’d be in and out in no time and there would be nothing to worry about. Unfortunately, he was wrong.

“There were times I was in the bath or in bed and I would seize up really badly,” explains father of two David, now 37.

“So I went to the doctor and he said: ‘You’re diabetic, we’ll do a blood test’”

He was in work and looking forward to taking his son to Liverpool to watch the Reds play Burnley at Anfield the following day when he got the call that changed his life.

There was no easy way for the doctor to break the news: “You have the blood of a 90-year-old,” he said, “I recommend you go to hospital now.”

Even then David took it all in his stride.

“So I got up to the hospital but the doctors were saying: ‘These results couldn’t be right’. I asked them what they meant and they said: ‘You shouldn’t be able to walk…’

“I said: ‘I was playing football on Friday night!’”

When he saw the results from his ultrasound the gravity of his situation began to dawn on him. He was told he needed a kidney transplant and, understandably, he admits he struggled to come to terms with how seriously ill he was.

“I was worried about my boys (Jude and Leon) and I was asking: ‘What’s going to happen to them?’ It completely changed my life in an instant.”

His kidneys were functioning at around eight per cent of their capacity but David’s remarkable ability to cope meant he didn’t have to go through dialysis. Meanwhile, friends and family willing to become donors came forward for testing. Some family members did shy away and David says the experience has opened his eyes to the organ donation process.

“It (donating a kidney) seems like a very scary thing but when you go through it you realise exactly what’s going on,” he says.

“People shouldn’t be afraid and I’m not just saying that because I’ve had a transplant – the whole process has opened my eyes to a bigger picture. Before I would have been frightened and it was a hurtful thing that my two brothers didn’t get tested for me when I had friends who I hadn’t seen since school who did get tested – I had 17 people who came forward.

“I’m grateful to all of them and when I look back I can see that people were frightened when they shouldn’t be because you are tested to the highest level.

“Now I want to open peoples’ eyes to be more open to it. My wife is on the register now, she is a living donor so if someone is a match she will donate.”

David’s mother was selected as his best match and she was due to go into hospital on July 11 but plans changed after a tragic traffic accident claimed the life of an 18-year-old woman from Birmingham.

David’s phone rang at 2am on June 26th and the voice on the other end of the line told him the deceased’s kidney was a better match than his mother’s. He was instructed to get to the City Hospital straight away so he got up, got dressed and left the house.

The closer he got to the hospital, the more nervous he became.

When he got there he had to wait 12 hours for the transplant operation and doomsday scenarios seized control of his mind. When he closed his eyes on the operating table, he feared he might never see his family again.

BRIGHT lights, blinking monitors, white sheets… A hospital ward. Relief first and then a raging thirst in his throat that reassured him he was still in the land of the living.

The operation had been a success. He’d never felt so thirsty and, with no-one around, he tried to get out of bed and make his way to the water cooler down the hall.

He got his left leg out but his right wouldn’t follow. He didn’t have to wait long until a nurse came along and he downed 10 glasses of water on-the-trot.

“My wife came in and I remember seeing her for about two minutes and then I fell asleep again back up in my room,” he recalls.

“I’m so thankful (to my donor). That poor family did a brilliant thing for me. I haven’t sent them a card and that plays in my head but it’s something I will do when I find the right words.”

Gradually his strength returned and his recovery was steady. He was finding his feet again when something none of us saw coming – the Covid-19 pandemic – turned his life on its head.

He didn’t leave his house for six months in the first lockdown.

“We were frightened,” he says.

“I thought if I left the house and got Covid it would kill me. I had to stop watching the news because I was getting paranoid.”

He disinfected his post and his shopping when it was delivered, his family couldn’t even get out for a walk in case someone brought Covid into the home.

“It wasn’t fair on the kids,” he says, looking back.

“They couldn’t do anything, we couldn’t even go for a walk. We didn’t see people, we didn’t go near anybody, there were no holidays…

“The whole thing affected my two boys. They knew that their dad wasn’t well and I saw them distance themselves from people because of it. I didn’t realise until maybe a year later that they were having problems at school.

“I think they were scared but my wife didn’t tell me anything at the time – it all came out afterwards. I think they needed more support, I think kids should be offered something when their parent goes through something like this.”

He was a prisoner in his own home and felt like he was clinging to life every minute of every day but he was able to find a path back into the world and Transplant Sport was the helping hand he needed. Transplant Games world record holder Orla Smyth was among the people who encouraged him to get involved in the Northern Ireland football team that travelled to Leeds last weekend to compete in this year’s Games.

“There are all different levels of football,” said David.

“I don’t care if it’s a transplant team, I’m just so proud to have done it and it’s making my recovery better, I’m starting to see the other side of things.”

Unfortunately a transplant is not a cure and David has to live with that. Transplanted organs last around 15 years on average so he will need to go through surgery again when he’s around 50.

His issues are still there, they aren’t going away but he has learnt to live with them and competing at the Games – and watching transplanted athletes competing in a range of sports from darts to the 100m to the pole vault – has shown him what is possible.

COMPETITION was fierce in Leeds. The Northern Ireland squad of seven men and two women (six kidney, one heart, one liver and a bone marrow transplantee) had their work cut out in the six-a-side football tournament.

The North started against Oxford and then played Leeds and a draw in their third group game meant they had to push forward in their final match. In the end, they lost 3-0 and bowed out determined to come back fitter and stronger next year.

“It took a lot out of us,” said David, who played at centre-back alongside Orla Smyth.

“I felt I had to push myself and the first couple of games were very close. The standard was very good, a lot higher than I thought it would be and it was more competitive than I thought but I like that competitive side, it showed that people care and they wanted to win.

“That was the first time we’d ever played together and we’re all looking forward to doing it again. We want to work on our fitness – a lot of people don’t even know this existed so hopefully we can recruit a couple of new players.”

Northern Ireland had never entered a football team at the Transplant Games before so history was made. Next year, with some training and a few new faces, they’ll hope to challenge for the title but how do you measure success? Every man and woman who pulled on the green jersey left the pitch a winner.

“I never thought I’d get the chance to play football again,” said David.

“I got to meet people who have been through the same scenario and that’s brilliant. To have gone over and done it, it makes you want more, it shows you what’s out there and what you can do.

“There’s an event for everybody and taking part in it was brilliant – I’d recommend anybody out there to get involved.”

Yes, his body was sore for a few days and every ache was a reminder of his celebration of life.