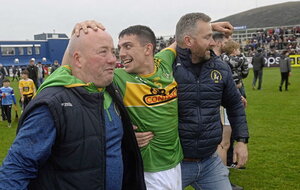 ON so many levels, the Cushendall hurlers couldn’t have given much more. Tactically speaking, so much went right for them. How this absorbing final unfolded was weighted in their favour too.

And yet they still couldn’t topple defending champions Dunloy as they claimed their fourth senior title in a row at Corrigan Park yesterday afternoon and 16th in their history.

Indeed, Dunloy’s hard-earned victory was a fitting conclusion to a brilliant weekend of hurling and minor championship football in the county.

The difference between the two best hurling teams in Antrim was what many anticipated before the game: Dunloy’s finishing.

Yesterday's final could be neatly summed up in a 60-second spell in the second half. With the sides locked at 0-14 to 2-8 after 43 minutes, Cushendall’s lively corner-forward Fred McCurry found a yard of space but his effort drifted wide of Dunloy’s posts.

From Ryan Elliott’s next puck-out, the ball was ushered to Keelan Molloy along the stand side. Faced with a more difficult angle than McCurry’s moments earlier, Molloy looked up and turned a half chance into a score for Dunloy.

In a game of inches, Cushendall’s execution of chances faltered, particularly during that third quarter.

“We did hit a few wides and then they hit one way out towards the sideline,” said Ruairi Og boss Brian Delargy.

“When Dunloy come under pressure their big players come up with scores. We probably worked ourselves into good positions to take our scores but you have to execute them all the time to win a championship and we missed a couple.

“That’s going to be hard to take over the next couple of days. A wee bit of luck here and there and we could have got over the line.”

Niall McCormick still managed to edge Cushendall in front in the 47th minute but Dunloy rattled off the next four points - a Cunning free and one apiece from Ryan McGarry, Chrissh McMahon and Seaan Elliott - and they broke for home.

Still, Dunloy kept the door ajar for a late assault from their north Antrim rivals.

Conal Cunning missed a gilt-edged free – a collector’s item these days – with a minute of normal time remaining and only for a goal-line save from Phelim Duffin to deny McCormick, the champions might have found themselves two down with 90 seconds of stoppage-time left.

As it turned out Molloy fired over another beauty for Dunloy and Chrissy McMahon rounded Liam Gillan with only seconds left on the clock to pop the ball into Cushendall’s net.

A six-point victory flattered Dunloy slightly, but they fully deserved to retain the Volunteer Cup.

The Ruairi Ogs crowded the middle and played some really fine hurling, especially in the opening half.

Dunloy, to their credit, never panicked at any stage and in the final 10 minutes showed why they are still top of the tree in Antrim.

Gregory O'Kane's side arrived in yesterday's final largely untested – but Cushendall were always going to be the ultimate stress test.

And the challengers didn’t disappoint either by bagging two first-half goals to turn this final on its head.

After just a minute, Cushendall had raised a green flag after the Dunloy full-back line was caught cold with the first aerial assault of the afternoon.

Dunloy ‘keeper Ryan Elliott got something on it, but the loose ball was scuffed home by Cormac McClafferty who cleverly followed up the play.

And just on the cusp of half-time, Sean McAfee flicked home McManus’s long puck to put Cushendall 2-5 to 0-10 in front.

Cushendall were always going to need goals to stand a chance of nobbling the champions but their defensive match-ups were working a treat too.

It was Cunning’s dead-eyed accuracy from placed balls that kept the scoreboard moving for Dunloy during that turbulent opening period.

“At half-time we said to get back to what we’re good at,” explained O’Kane.

“We’ve got pace, we’ve got legs, we’ve got runners and eventually if we get a one-on-one - and Chrissy McMahon’s finish was outstanding and Coby’s free-taking: where would you see it? Outstanding.

“You can’t experience a battle until you’re in it and come out the other side,” O’Kane added.

“I can’t train that on the pitch because you can’t create it. That team, you’d have to say, has really grown up here today and managed the game out.”

Dunloy’s half-back line of Aaron Crawford, Kevin Molloy and Eamon Smyth stood strong and theirs and Shorty’s clever distribution up to the front men was impressive, especially when they were under serious pressure from the Cushendall half-forwards and midfielders.

And even if the Cushendall backs did a good job in tying up the Dunloy forwards for the best part of the afternoon, Molloy, McMahon and Seaan Elliott only needed fleeting moments to make a difference.

O’Kane said: “I knew they would try and suffocate us here (pointing to midfield) and disrupt the ball going in. Cushendall are a good side, they bring that physical edge to it and they will always live off scraps, they will always stay in the game with you. That’s what Cushendall do. But then we got a bit of width in the second half.”

It was the kind of game Dunloy sorely needed should they end up meeting their nemesis Slaughtneil in another Ulster final.

First, though, the Derry champions have the sizeable task of overcoming Down champions Portaferry towards the end of November.

Cushendall left west Belfast with plenty of credit in the bank having come closest to dislodging the fleet-footed champions.

“Everyone wants a crack at Dunloy but they are four-in-a-row champions for a reason,” said Delargy.

“They’ve been the best in the county over the last few years and it’s up to everybody else to strive to get there. We had a good rattle at it today but we’ll regroup and come back at it again, we’ll never go away. There’s a championship in this team.”

For Dunloy, the Monday club is probably in full swing.

For Gregory O’Kane, it will be the tranquillity of Portrush strand and staring blissfully into the sea.