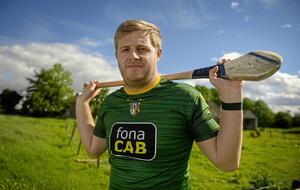 JAMES McNaughton only touched down on Irish soil in the early hours of yesterday morning, but the Antrim ace will be part of Loughgiel’s squad for tomorrow’s championship clash with Cushendall.

The 25-year-old has spent much of the summer in New York after defeat to Cork in June signalled the end of the Saffrons’ Championship.

However, with his Tipperary side losing out to Hoboken in last Sunday’s New York Championship semi-final, McNaughton has returned home in time to make himself available for the Cushendall game, having missed Loughgiel’s opening Group Two defeat to St John’s.

And Shamrocks boss Hugh McCann is glad to have his class to call upon going into such a big game.

“James came back this morning, I haven’t seen him yet, but he is definitely part of the squad on Sunday,” said McCann.

“You don’t have a man like James McNaughton and not include him in the squad. James was always going to be a key part of our championship, in the last few games for Antrim he was incredible… look, James is an outstanding forward, an outstanding man, great at taking frees, very athletic.

“I’m looking forward to seeing him playing for the club again.”

Having lost out to the Johnnies a fortnight ago, McCann is hoping Loughgiel can get back to winning ways tomorrow.

The Shamrocks boss is well aware of the size of the challenge that lies ahead, and will be coming up against a familiar face in Ruairi Ogs stalwart Eoghan Campbell – partner of McCann’s daughter Eilísann.

For the time being, therefore, hurling chat is strictly off the table.

“Eoghan’s a super lad, you couldn’t ask for better to be honest with you… but he becomes the enemy for 60 minutes on Sunday,” smiles McCann.

“We talk hurling, especially around the Antrim games, though he likes to get away from it at times too. He’d be very laid back.

“But as far as the match this weekend, me and him haven’t even discussed it. It’s not fair for me to bring it up with him, he probably thinks the same the other way round. We have too much respect for each other.

“He wants to win with his club obviously and I want to do the same. That’s just the way it is.”

Although Loughgiel will welcome James McNaughton back into the fold, the Shamrocks are resigned to being without the influential Damon McMullan for the remainder of the year as he recovers from shoulder surgery.

And, having left themselves too much to do after a slow start against St John’s, McCann hopes that lessons will be learned as his exciting young side continue to acclimatise to the cut and thrust of Antrim championship action.

“The league campaign was okay but you’re playing against teams without county players… in championship things move up another gear, so you’re getting them used to that.

“I’m happy with the progress they’ve made, they’ve put in a real big shift this year. Part of that process is, yes, to win championships but you’re also building for the future to build them into good young adults as well as good young hurlers.

“We were disappointed after the St John’s game, obviously. We showed a lot of spirit to bring it back to a point and, but for a few mistakes, we could have drawn or won the game.

“The wee bit of luck wasn’t on our side that day, maybe there was a wee bit of inexperience too, but St John’s are a good team.

“They’ve proved over the last number of years that they’re not far away. Hopefully we can learn from that for this weekend.”

COUNTY champions Dunloy will hope to continue moving through the gears when they take on Carey Faugh’s in Loughgiel today (4pm).

Gregory O’Kane’s men, gunning for a sixth county championship crown in-a-row, got this year’s campaign under way with a convincing 2-29 to 1-16 win over Ballycastle earlier this month.

They are boosted by the return from America of influential midfielder Keelan Molloy, who featured in the Dunloy footballers’ intermediate championship demolition of Ardoyne last weekend and could play some part today.

The Cuchulainn’s have already welcomed Nigel Elliott back into the fold in recent weeks after his return from Australia, where Elliott had been since the end of 2019.

Ballycastle are keen to get some points on the board after losing out to Dunloy in their first game, while Rossa saw off Carey. The Belfast men could have county powerhouse Gerard Walsh back on the field, as he recently returned from America and play the last 15 minutes of Rossa footballers’ clash with Naomh Eanna last Sunday.