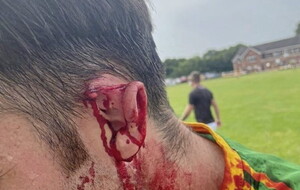 NIALL Savage hadn't played hurling for two and-a-half years. He met Dan McCusker, manager of the Ballela club in Down, for a game of golf last week and as they walked the fairways his friend lamented the fortunes of the rural club.

With holidays and injuries he was short on numbers, they were struggling to field and had an Intermediate Championship game coming up against Clonduff on Sunday. Dan had an idea: Would Niall bring his boots?

Ok, he agreed to help the club out and went along expecting to be a substitute. But one thing had led to another and when the sliothar was thrown in, Niall was playing at left half-forward in a third-midfielder role.

“I was getting plenty of ball but I started getting a bit tired so I went in to centre half-forward,” he explains.

“Their goalkeeper got the ball and he had only one way to go so I tried to cut him off. Instead of me trying to protect myself, which you are taught from underage level, I thought I could block the ball as he struck it.

“I came in at a right-angle and was leaning across him but I missed the ball and his follow-through caught me.”

The top of his left ear was almost severed in the impact which also left a gash on the back of his head. His ear quickly became cold and numb but there was no sign of blood and, remarkably, Niall played on for another 10 minutes.

“I was waiting for blood to come down onto my jersey and I was looking and looking but nothing came. I thought: ‘Right I'm grand'.

“Then the blood did come and I thought: ‘Right I've nipped the top of my ear' but nobody noticed anything, nobody said anything until one fella from our team said: ‘Here Niall, your ear is bleeding quite badly'.

“I was trying to avoid the referee because I knew he would make me change my jersey and the game was only starting to get going. We were taking a free and then he noticed it and said: ‘Hi boy, your ear is hanging clean off'.

“I said I would be grand but he told me to lie down and he called the physio down. My wife is a doctor and she was at the game so they got her over.

“There was no pain whatsoever, the blood had even stopped and I was saying: ‘What's wrong?' and they told me part of my ear was missing. My wife wrapped it up with bandages and said: ‘Right you're coming to A&E right now and we went straight to the Royal.”

The travelled to Belfast and Niall had to wait nine and-a-half hours before he was treated. He was advised that he needed a plastic surgeon to reattach the top of his ear but eventually the A&E consultant offered to stitch it.

“He did a great job,” says Niall but he has been advised that he might lose the top of his ear and will never get the feeling back in that area.

“When I took my jersey off, all the blood had come down the inside of the jersey and my whole chest was just destroyed with blood – it had gone down the back of neck as well,” he explained.

“The doctor said: ‘You must have lost a lot of blood, do you feel dizzy?' But I didn't, the adrenaline must have been pumping.

“Everyone else was getting upset and I was saying: ‘I'm 100 per cent'. I didn't touch it, I'd say if I had put my hand up and felt it I probably would have panicked. I'd say my heartrate would have gone up a good bit!”

The Ballela manager was distraught afterwards and apologised for encouraging him to play in the game but 34 year-old Niall remains remarkably philosophical and positive about his gruesome experience.

“It's a contact sport and if you tried to do what happened to me again you couldn't. I've had injuries before but I've never seen anything like it in my life.

“Ironically, I would have had a name for being a bit ‘yella'. I always hated that because it's not that I was yella but if there was a man in a ruck I waited for him to knock the ball out instead of me getting involved in the ruck as well. Then boys would have said to me: ‘Why are you being yella? Get in there!'

“So last week I just decided I was going to get wired into everything. I thought: ‘If this is the last game I play I'm going to get stuck in'.”

Ballela's next championship game is against Liatroim and Niall intends to tog out even though the Ballela manager has told him there's “not a hope in hell” he'll be playing.

“The odds of this happening again are a million to one,” says Niall.

“An injury like that wouldn't put me off at all. There were kids there on Sunday and I told one of their mothers: ‘Don't let this put your children off playing hurling because this might never happen again for a million years'. In the helmet era I've never really seen anything like it.”