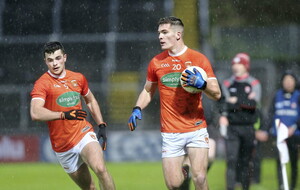 AN historic milestone for Craobh Rua last week was a positive sign for hurling in the Orchard county as the Camlough-based club won their first-ever Armagh Senior Championship match.

A two-point win over Cathedral City outfit Cuchulainn’s in the first round of fixtures was a long-awaited breakthrough win for the south Armagh side who now meet Keady (3-18 to 0-12 winners against Derrynoose) in round two this evening when four in-a-row chasing Middletown enter the fray in the five-club, round-robin stage.

“Getting our first win in the senior championship was absolutely fantastic and we’re looking forward to the challenge against Keady. They’re a top side, everybody in Armagh knows that Keady and Middleton are the top two teams in the county and Keady probably have their eye on trying to overcome Middletown this year.

“So it’ll be a good challenge for us. They have some good players - Oisin Keenan at six, Fintan Donnelly and Shea Harvey inside… They have top class players but we’re looking forward to the challenge and it’s great to be able to play these teams week-in, week-out.

“We’re looking forward to all four games and we’ll see where we are after that. It’s great to get four games at senior level.”

Croabh Rua won the Armagh junior championship in 2020, only their second title at that level. They retained their crown last year and went on to win a first-ever Ulster Championship – beating Donegal’s St Eunan’s, Antrim’s Con Magee’s and (in the final) Monaghan champions Carrickmacross along the way.

There was disappointment in the All-Ireland quarter-final when they lost on penalties against Manchester’s Fullen Gaels in Birmingham but Croabh Rua have continued their upward trajectory this year and met the challenge of senior hurling head-on.

“In junior hurling it can be difficult sometimes to showcase your skills because it is quite physical and you can be bogged down at times,” O’Hare explained.

“In many ways, getting a win in the senior championship is as good as anything we achieved last year and the main aim for this club is to be a senior hurling team in Armagh.

“We don’t want to be known as a junior club, we want to be an established senior team that can compete with the likes of Middletown and Keady.”

Club chairperson David O’Brien says the club’s objective is to become established as a senior outfit. “Last week was a very positive and historic result - our first ever win in the Armagh senior championship,” he said.

“We have some fantastic volunteers in the club particularly at underage coaching and we aim to stay as a senior club.”