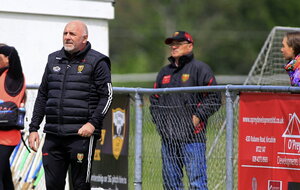 Ronan Sheehan has been encouraged by how Newry Shamrocks have acquitted themselves in the Down SHC Picture: Seamus Loughran

BREDAGH boss Donal Hughes insists that his side will need to improve in their performance against Newry Shamrocks last week if they are to put a dent in Portaferry’s title challenge.

Portaferry and Bredagh are the early pacesetters having won in their opening rounds against Ballycran and Shamrocks respectively, but Ballygalget will be looking to shake things up when they make their introduction to the Down Senior Hurling Championship.

Bredagh take on St Patrick’s Portaferry on Sunday, August 14, in Carryduff at 2.30pm, while Ballygalget are at home as they welcome visitors from Newry.

There is no relegation from this year’s senior club championship, which takes some of the pressure off the teams but certainly doesn’t erode any pride according to Shamrocks player/ coach as well as Down senior hurling manager Ronan Sheehan.

He was disappointed to leave Pairc Esler last week without two championship points, or even a point, but he saw enough in his side to suggest his team will be no walkover, despite bridging a 35-year gap from their last run at the top tier of Down club hurling.

“It was difficult for us to say what our target is because we haven’t been in the senior championship in so long and you don’t know how close you are or how far away you are from competitiveness,” Sheehan said.

“We are hopeful we will be competitive in the other games as well. We have three or four very good players over in Australia that will be back next year.

“And I think we showed today that we deserve to be in the senior championship and hurling in Newry is in a good place and we will try and push on against Ballygalget, we certainly won’t be waving the white flag and we will go and try and get the two points on the board next week.”

That’s the positive attitude you want from your leader, especially as Newry face Ballygalget. Marc Fisher, John Hughes, Oisin Coulter and the brilliant John McManus have been in fine form during the Antrim League earlier this summer.

Caolan and Cormac Coulter will take some watching too, while Michael Og Doran tends to shine on his home patch.

Shamrocks will want to give a good account of themselves but will need Ballyholland footballer Ruairi Campbell, young Michael McKey and Down county men Jordan Murphy and dead-ball specialist Paul Sheehan to be on form.

Armagh brothers Artie and Eoin McGuinness will enjoy the test against the best and they’ll relish playing the game in the Ards. Don’t rule out an upset.

Bredagh manager Donal Hughes achieved his first objective by winning in Newry last week but he feels it his side can work towards breaking the monopoly the Ards clubs have had in the Down scene.

No team outside Ballycran, Portaferry and Ballygalget have won the title since Kilclief won that honour in 1956.

“Our target this year was to win this one [against Shamrocks] and hopefully maybe getting another win against one of the Ards teams and get an easier semi-final rather than finish fourth and face the top team,” said Hughes.

“Hopefully, we will get into the semi-final, unless Newry beats one of the Ards teams, which could happen the way them boys are playing, I was impressed.”

Sean Hughes and Donal Hughes will be expected to lead the attack against Portaferry, while the impressive Michael Woods and Liam Hogan will be tasked with curbing the influence of Daithi Sands and Finn Turpin.