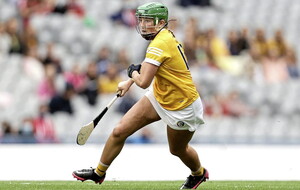 Antrim's Roisin McCormick should be a shoo-in for an Allstar

A PROBLEM in nominating a short-list of 45 players a few weeks in advance of the All-Ireland camogie finals is that it does not legislate for someone who steps out in Croke Park for the first time, scores four goals and two points (including a hat-trick in 84 seconds) and picks up Player of the Match.

Dervla Cosgrove’s performance last Sunday means that she is a glaring omission from the nominations in the forward line, although she had probably served notice by hitting a first half hat-trick of goals in the first championship match against Roscommon and added 1-9 in a group game against Armagh.

Luckily, those selecting their All-star team can add in other names apart from the 45 nominated.

The other stand-out performance in Antrim’s Croke Park success was Áine Graham. The Ahoghill shot-stopper had already done enough to get one of the three nominations for goalkeeper.

Áine and her older sister Caitríona are up against Down goalie Catherine McGourty. Although both her opponents were facing the top players of the moment in the senior championship, the younger Graham probably puts herself in pole position after her eighth clean sheet from the 12 games this new Antrim “reserve” team played in 2022.

Ulster camogie has really been on the rise since Down lost to Cork in an Intermediate All-Ireland final in 2018.

The Red and Blacks went on to win the title in 2020 and added the Division Two league crown last year. Antrim followed them to the Intermediate title last year and both counties have retained senior status for next year, with the Saffrons finally breaking Down’s hold on the Ulster senior championship.

Then you have Derry’s sleeping giant rising to come within a single point of an Intermediate final appearance, Cavan collecting a Division Three league title and Armagh and Antrim contesting the All-Ireland Junior final, while Tyrone collected the Nancy Murray Cup last Saturday after losing the past two finals.

Competition for places on the Irish News team of the year has never been keener.

Would Down have survived in Division One and the senior championship without the stand-out performances of Dearbhla Magee and Niamh Mallon?

Despite carrying a heavy injury into the last group game with Offaly, Mallon’s three points from play were vital to Down’s survival.

Paula O’Hagan relieved her of free-taking duties that day and the Clonduff stalwart’s return to the fold after the birth of her son back in January was also a key element in Down’s survival in a season that saw a number of the leaders from the 2020 team unavailable either through pregnancy, retirement or injury.

Other players had to take up the slack and of those, Beth Fitzpatrick, Clara Cowan and Aimee McAleenan were the most impressive.

Antrim had to go through their season without 2021 Player of the Year Maeve Kelly who picked up an injury just before Christmas and is still out of action.

Her forward side-kick Róisín McCormick took over however and should be a shoo-in for an All-star; her first half in the league semi-final was absolutely sublime. Caitrin Dobbin was also an ever-present goal-threat.

Defensively, both Down and Antrim have had to adopt to senior level camogie and employ sweepers. None has been more effective than Loughgiel’s Amy Boyle, while other Saffrons to stand out over the year have been the central defenders Niamh Donnelly and Caoimhe Conlon, with Lucia McNaughton continually impressing at midfield.

Derry’s season of progress was hampered early on by the involvement of Slaughtneil and Eoghan Rua players in the club championship and then by injuries as Martin Coulter and Danny McGrellis were trying to put a championship run together.

Despite a bad run of injuries in late June and July, there seemed to be a clean bill of health ahead of the All-Ireland semi-final only for Aoife Ní Chaiside and Maria Mooney to leave the field at key points in the game.

The Derry player of the year however has to be Megan Kerr. A dynamic midfielder as Eoghan Rua took the club-title, she was re-cast as a tight-marking corner-back for the county team and few forwards took any scores off her.

Absence through injury curtailed others, but ever present were Áine McAllister and the Swatragh pair of Dervla O’Kane and Máiréad McNicholl while the goal-scoring of Aoife Shaw pushes her into reckoning for a place in my forward line.

Up until Sunday, Armagh were the top team at Junior level and the midfield pairing of Leanne Donnelly and Shelly McArdle did much to put them into that position. Only one of them might be in the frame for an All-star and I would lean towards joint-captain McArdle.

Ciara Donnelly has carried Armagh scoring for too many years now and it took the arrival of former Cork star Jenny Curry to shoulder some of the responsibility this year. Curry made a difference, particularly during a tense semi-final when Donnelly was held to three points from frees. Curry’s goal broke Cavan resistance in the middle of the second half and she added three points as well.

Cavan’s run to a surprise Division Three league title and an appearance in the semi-final of the Junior All-Ireland was built on a tight defence, the goal threat of Shanise Fitzsimons and the free-taking of Clodagh Fitzsimons. Of the defenders Erinn Galligan and Rosie Crowe-McKeever not only did their job, but led their lines as well and will be close to All-stars.

The progress of Tyrone camogie rests on the shoulders of young players like Reagan Fay. The Eglish forward was probably deserving of a nomination, but if Tyrone continue on an upward curve, hers will be a name to note.

My Allstar team will not meet with universal approval and neither should it. There have been plenty of tight calls as I have tried to balance the performances of players across the grades against each other.

Obviously I haven’t been able to cover every single inter-county game this year, but streaming of matches has helped me keep a tag on what has been happening at all levels and my observations have led me to come up with the following

Nominations for the Irish News camogie Team of 2022