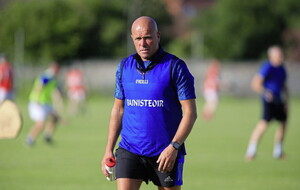 A SUN-BURNT pitch, a healthy evening crowd, some awesome scores from both St John’s and Loughgiel Shamrocks, a thousand bone-shuddering challenges, proper growling from behind the wire, a couple of red cards and nerves completely shredded by the end.

And this is only the group stages of the Antrim senior hurling championship. As far as balmy summer evenings go, there were worse destinations than a resplendent Corrigan Park on Saturday evening where the Johnnies just about resisted a brilliant second-half comeback from the Shamrocks to bank the opening day points.

No wonder Brian McFall’s first port of call after this hugely engaging clash was to the upstairs lounge for a pint.

“Matches like that aren’t good for the heart,” said the St John’s manager as his side held on for a two-point win.

Reduced to 13 men in stoppage-time, the St John’s defence charged down Declan McCloskey’s late, late free as the Shamrocks aimed for a goal at the death.

The Johnnies breathed a huge sigh of relief at the final whistle, almost squandering commanding leads at various stages.

Minutes earlier, Conor Hand was sent off for the home side for interfering with an opponent’s helmet, while full-back Ryan McNulty took a second yellow for the team to stop Loughgiel substitute Shan McGrath getting a sight of the home side’s goal.

The St John’s post-match huddle was more like a scene from Saving Private Ryan. With a heavily strapped ankle, Domhnall Nugent just about made it to the circle as McFall addressed his players, while fellow county ace Michael Bradley hobbled around the pitch for most of the second half.

It would have been a travesty had St John’s lost this Group Two tie. They made sprint starts to both halves, leading 0-9 to 0-1 after 16 minutes and forged nine ahead [0-17 to 0-8] after man-of-the-match and Down ace Oisin MacManus nailed a ’65 on 34 minutes.

It took the visitors a while to waken up to the reality that they were on the championship stage. They’ll rue a raft of early wides and left themselves a lot to do on the scoreboard in the second half.

Declan and Daniel McCloskey were the architects of Loughgiel’s gutsy comeback and Ronan McMullan’s placed ball conversions were on a par with his opposite number MacManus.

Substitute Maol Connolly gave the Shamrocks renewed impetus and more penetrating pace in the final quarter, and an unlikely comeback seemed possible when Ryan McKee’s speculative free dropped into the St John’s net in the fifth minute of stoppage time to reduce the arrears to one point.

Aaron Bradley, a senior Antrim panellist, found his range seconds later to give St John’s some breathing space before Declan McCloskey’s last-gasp free at the other end was blocked.

St John’s had literally fallen over the finishing line.

When Loughgiel were coming on strong, McFall had Michael Dudley’s fantastic radar to thank.

The wiry midfielder nailed critical scores in the 58th and 59th minutes that were immediate replies to Ronan McMullan’s razor-sharp free-taking.

The difference between the sides for large swathes of the game was St John’s number 15 Oisin MacManus, who only recently transferred from Liatroim Fontenoys.

He ended a memorable evening with 10 points. He hit the first three scores in both halves and looked a class apart when it came to shooting.

Conor Johnston, who returned from America 48 hours earlier, craftily fed off scraps in an around the high pucks aimed at Domhnall Nugent and ended with three important points.

“We started off well and that’s what we wanted to do,” McFall said.

“We had a purple patch but Loughgiel were always going to come back into the game… We’ve still a lot to work on. It was a dogged second half and we should have kicked on but we’ll work on the mistakes we made for the next day.

“I know it’s not the business end of the championship but that game gives us a good incentive to push on.”

While they finished on the wrong side of a tight game, this Shamrocks team might be in transition, but they showed their warrior spirit and undoubted ability in the second half to suggest they will match anyone they’ll face in this year’s championship.

Next up for them is Cushendall while the Johnnies face St Enda’s on Sunday, August 21.