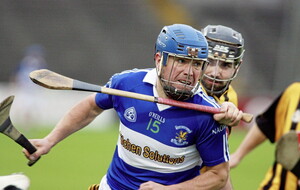 Brian McFall during his playing days. The St John's man hopes to lead his club to championship glory

AT St John’s, Belfast GAC you keep on going. Even when you look at the club’s senior hurling championship record over the past couple of decades and wince, they keep on going.

Games they were in control of but somehow slipped from their grasp.

Cushendall turned them over a couple of times at the semi-final stages in recent years.

In 2018, the Johnnies were five up with five to play and Cushendall still won. Another Houdini Act from the Ruairi Ogs.

The following season, St John’s were twice in front in stoppage-time and twice Cushendall came back to snatch a draw.

“We had chances to win it. It’s hard to take,” said the-then selector Brian McFall after the drawn semi-final in 2019.

“We just can’t seem to get away from them, no matter what. We were five points up in last year’s semi-final, but we just can’t put them away and they come back to sting you.

“Cushendall got a draw at the end and fair play to them, but it’s one that got away from us.”

Don’t ask who won the replay.

In 2020, St John’s and Loughgiel Shamrocks produced a semi-final for the ages. Domhnall Nugent played like Cuchullain up in Dunsilly but they still couldn’t get over the line.

Which brings us to the perceived injustices of Dunsilly 11 months ago.

Should Nugent’s close-range ‘goal’ have stood? We all received the video footage at least once on our phones that went viral on WhatsApp that Sunday night.

Defending champions Dunloy pulled away in the end to book their final place.

“I couldn't fault any of our lads that day,” McFall says now.

“We lost Ciaran [Johnston] after a minute and 30 seconds. Everything that we did worked out, game plays, it was a kick in the balls. But all the lads were fantastic.

“We had opportunities but Dunloy just pulled away in the last few minutes. I was disappointed with some calls that day. I was sore after it, and it is still raw when you look back at the video. There were critical calls made at critical stages but towards the end our lads just ran out of gas…”

Just when you thought the defeats couldn’t get any more bitter, the Antrim Senior Hurling Championship – one of the best club championships in the country – finds another way to steal your soul.

St John’s have had theirs stolen a thousand times.

But they keep on going. It’s the St John’s way.

As manager, Mickey Johnston gave everything to get his club over the line before handing the reins over to McFall last year.

But being a dual club doesn’t help their cause.

You can dance around it, cite demanding fixtures schedules - but when you’re sharing close to a dozen players in both football and hurling, the fine lines of the modern game mean that winning championships are probably harder than they ought to be.

If you keep doing the same things, you’ll yield the same results.

“The record speaks for itself,” McFall concedes.

“You look at the last number of years: when was the last time a dual club won? That gives you your answer. ’Rossa are in the same boat. Look at the teams that have won it.

“We’re in a group with Cushendall and Loughgiel this year. They’re training three nights a week, maybe four, whereas when our lads are with the football you could be training with 13 players. That's just the way it is. You manage things between both management teams and try and look after the players as best you can.

“But we’ve been doing the same things over the last lot of years and we’ve been getting the same results. The hurlers should have been over the line more times than enough and we can only blame ourselves on that too. But because of the duality it is getting harder.”

The last time St John’s won the Volunteer Cup was back in 1973 when they shredded the form-book by seeing off Ballycastle in the final played in Dunloy.

Tommy Best, Gerry McCann, Des Armstrong, John Gough, Andy McCallin and Sean Burns ruled the roost for the Johnnies who went on to win Ulster too.

Since ’73, the Corrigan Park men made only fleeting appearances in senior hurling finals and have stalled on seven titles on the county’s roll of honour.

McFall (45) was one of the bright lights coming through the cradle of Corrigan in the early 1990s.

“I made my debut for St John’s when I was 16 against Ballycran,” says the former Antrim forward.

“I came on in the county final in the 1994 against Dunloy. That’s when Dunloy were starting to come. You were thinking: ‘This is great this craic - we’ll play in finals every year.’

“But we didn’t. We played Cushendun in the semi-finals in 2000 and we were confident going into that, but they turned us over in Casement that day.

“We came close a few times but we didn’t get over the line. 1994 was my one and only appearance in a county final and I was only starting out. I didn’t get to play in another one.”

Representing Antrim between 1998 to 2007, McFall was one of the best forwards of his generation. He always played with a swagger – just like this St John’s team. So management and player appear well matched.

Despite being a dual club and their harrowing bad luck at times in the Antrim senior hurling championship, the current St John’s crop would be regarded as one of the best the club has ever produced.

“I know there is a really good crop of players there because they came through the grades and won everything. They’ve won minor doubles, at U21 they won football and hurling for two years running. So the next step up is senior.

“It’s there, there’s no doubt the talent is there. We do need to win one because there is a gap behind us at our club.

“I’ve said it before this is the most skilful group of hurlers that I can ever remember.

“I played in St John’s teams where fellas would have died for each other. Some of them mightn’t have been the most skilful but they would have gone to war with you. I believe there is a group of hurlers here to win one.”

This year has been testing to say the least for McFall. The squad have endured five surgeries as well as a lengthening injury list.

Their playing resources were stretched to such an extent over the July holidays that the manager had to pull on the number 14 jersey to play in a league game against Ballygalget.

“At this time of year you do get that bit of a buzz because it’s the championship and you’re thinking: ‘I’d love to go out and play.’

“Your head still tells you that you can do it, but I’m 45 now. I played against Ballygalget in that league game, I can’t remember the last time I played a game.

“I’d always be tipping away with the ball in training and you’re thinking: ‘I’m grand.’ But see when I took off for the first time to the right side the hand was nearly up to take me off!

“I went to work on the Monday and I was like a man of 90 getting out of bed! My legs, my back, my hamstrings were aching – you’d thought I was beat up by a crowd! You still think you can do all these things but it’s from the neck down that’s the problem.”

St John’s had five players on the county panel in 2022 – Nugent, Michael and Aaron Bradley, Conor Johnston and Conall Bohill.

McFall crossed his fingers and toes during last Sunday’s football championship tie between St John’s and St Gall’s. All the dual contingent came through unscathed and should be available for tonight’s championship opener against Loughgiel Shamrocks at Corrigan Park (6pm).

Indeed, tonight’s opponents are cited by McFall as a glowing example of resilience and never giving up.

“We know we’re as good as anybody and that’s something we’ve tried to drill into them from an early age,” McFall says.

“It’s just that bit of luck that we haven’t been getting. But we always recharge and go again. Loughgiel lost six finals in a row and they came back every year and once they won it, they kicked on and won an All-Ireland. Our lads just keep coming back for more.”

He could give you chapter and verse about how difficult it is to juggle the club’s relatively small pool of players and remaining competitive at senior level.

But everybody knows the Johnnies have the talent in their ranks and if the ball breaks for them, they can definitely make a decent fist of this year’s championship. O’Donovan Rossa – another dual club - got to last year’s final and showed that they weren’t far away.

The St John’s boys know they aren't far away too.

THE Antrim senior hurling championship – the club championship that keeps on giving. In saying that, the last couple of finals have been disappointing, but the group games and last four encounters produced some incredible, nail-biting entertainment.

O’Donovan Rossa were the story of last year’s championship, claiming some big scalps along the way, before running into a fantastic Dunloy side in the decider who celebrated three-in-a-row with a masterful display.

Whether ’Rossa can repeat those remarkable exploits of last season is debatable with quite a number of key players unavailable in 2022, including county defender Gerard Walsh who is in San Francisco.

St John’s have been knocking on the door too over the past couple of seasons and with 14 men gave Dunloy a run for their money up in Dunsilly before running out of gas.

If the Johnnies can steer clear of injuries, juggle the dual players and get a couple back, they’ll fear nobody.

Dunloy may be missing a couple of players too this term, but Gregory O’Kane’s men remain the team to beat. Their nearest rivals could well be Cushendall who appear recharged after a couple of disappointing championship campaigns.

Managed by Brian Delargy and Karl McKeegan, the Ruairi Ogs will be aiming for their first Volunteer Cup since 2018 without the services of defensive stalwart Arron Graffin (knee injury).

Everyone will watch with interest how Loughgiel Shamrocks get on in this campaign without key attacker James McNaughton who is in America.

Mickey McCambridge’s St Enda’s have targeted another quarter-final berth, while Carey Faughs step into senior after an encouraging year in the Intermediate ranks.

It looks like being Dunloy, Cushendall and possibly St John’s as an outside bet.