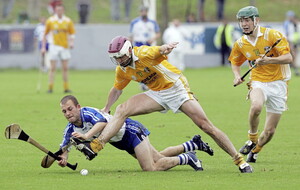 Michael McCambridge (centre) represented Antrim with distinction during the 'Noughties'

THE links between St Enda’s, Glengormley and Cushendall appear to be as strong as ever with another Ruairi Og man in charge of the Hightown Road hurlers.

Terence McNaughton guided St Enda’s to county and provincial intermediate titles in 2019 and his Cushendall club-mate Mickey McCambridge has been at the wheel since last season, trying to make gains at senior level.

And as it happens, St Enda’s first championship outing of 2022 is against Cushendall this evening.

“It’s not easy managing against your own club,” said McCambridge, who represented Antrim for the best part of the ‘Noughties’

“It’s a team I’ve broken bones playing for. One of the first meetings I had with St Enda’s was telling them that Cushendall is in my heart and always will be, but I’m here to do a job. I like to be competitive and I like to improve the team I’m working with, and that’s what we’re trying to do.”

McCambridge retired at 30 but returned to make a few cameo appearances for Cushendall’s third string this year in between St Enda's training sessions.

He’s been living nearby to the St Enda’s club for the last number of years and got to know some of its members.

“I would have trained at their pitch during the week when nobody was about.

“I ended up helping out at the odd U16 training session. I would have gone up to the club to watch Liverpool games and you would get chatting to a few people.

“Over the years Stephen Jennings would’ve asked me to get involved but there was always something else happening and then out of the blue two years ago he rang me and it just happened to be good timing. I’m really enjoying it, they’re a great club to work with and have big aspirations of where they want to go.”

Last year, the GAA was still tentatively coming out of COVID. Grouped with O’Donovan Rossa, Loughgiel and Ballycastle, St Enda’s target was to win a championship match, which they did by taking Ballycastle’s scalp in their last group game to reach the knock-out stages.

“The players mentioned it themselves at training this week that the minimum they’ll accept is getting into the quarter-finals,” said McCambridge.

“They’re realistic as well because they know they haven’t had those years of experience behind them to reach semi-finals and finals.

“This year is about putting in more competitive performances and seeing what the scoreboard is like at the end of games. It’s a stepping stone every year.”

Preserving their Division One status this year was another step in the right direction for the Hightown Road club.

Last season, McCambridge was coaching and managing the St Enda’s seniors but now has highly respected coach Mickey McCullough alongside him.

“I’ve known Mickey for a long time. I played with him at underage at county level and we’re very fortunate to get him in with us this year.”

Cushendall, managed by Brian Delargy and Karl McKeegan this season, haven’t reached a county final since 2019 and are likely to be without the experienced Arron Graffin (knee) for this campaign.

Darren Gleeson commits to another two years with Antrim hurlers