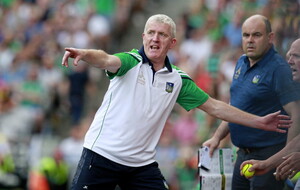 SLICK skills weren’t enough. Pace and physicality wasn’t enough. To win yesterday Limerick also had to match Kilkenny’s spirit and show composure in the heat of battle and that they did so delighted their manager John Kiely.

Kiely’s Treatymen completed a three in-a-row with their fourth All-Ireland in five seasons and the Limerick manager said yesterday’s victory against a superb Kilkenny side that fought and scrapped and pushed them all the way to the final whistle was the pick of the Limerick litter.

“Look at the opposition we had to play - we played everybody in Munster. We had an incredible battle with Clare in the Munster final. Galway, a super side that we had huge battles with over the last five or six years as well. And obviously then to meet Kilkenny in the final…

“We had done our homework on Kilkenny the same we do with every team.

“We knew the numbers they were hitting in terms of their tackling and the scores they were getting. They were putting in numbers that we knew were significant and their performances were very, very significant.

“It took that performances and it took it in absolute spades. It's probably even a better performance than I'd hoped for to be honest.”

After an early goal from Gearoid Hegarty, Limerick took control of the game but Kilkenny clung to their coattails and there were only four points in it at the break. A rousing score from substitute Richie Hogan levelled the game after 63 minutes and Kiely admits he thought: “Christ, what do we have to do to get away from these guys?”

“We were hurling well,” he added.

“We were winning puck-outs, creating scoring opportunities and yet they were still there. Who was going to respond (after Hogan’s point)?

“Who was going to go into the ascendancy and dominate the next minutes of the game and create the next number of scoring chances and taking them? Ultimately we did.

“We found the resolve defensively and in attack. For lads coming off the bench to take on the shots that Cathal O'Neill took on, that Conor Boylan took on, that Peter (Casey) took on and kept taking on. Even though we didn't get them all but we took the chances on and committed to them.”

Limerick had scraped past Galway in the semi-final and Kiely said that some of his players – including yesterday’s man of the match Hegarty – had been bitterly disappointed with their performances in that game. Over the past two weeks Kiely witnessed a fierce intensity in training as his men resolved to sign off with a season’s-best performance.

“I’m just thrilled with the performance,” he said.

“We knew it was going to be a really tough game. When you are coming in like we were after winning two, it is really challenging to be ready and on the money but we were today.

“We knew that ourselves from the minute we got into gear this morning. We met in the train and the noise levels in our group were through the roof and that is always a real barometer of where we are at as a group, particularly the player group.

“There were huge amount of banter, just fun, no nerves. There was nothing to give any indication that there was any nervousness there at all. Our day went really smoothly as well. Everything was almost a minute or two ahead if you like. It is an important part of what you have to do in order to perform.”