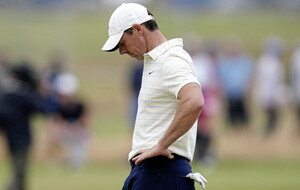 McIlroy held a two-shot lead midway through the final round at St Andrews and carded a bogey-free closing 70, but that was not enough to end his eight-year drought in the game's biggest tournaments.

Smith, who held the halfway lead before falling four off the pace with a third-round 73, fired eight birdies - including five in-a-row from the 10th - to card his second 64 of the week and finish 20 under par, beating the previous best of 19 under on the Old Course set by Tiger Woods in 2000.

American Cameron Young made a brilliant eagle on the 18th in his closing 65 to force Smith to hole from two feet for his final birdie, leaving McIlroy needing his own eagle to force a four-hole play-off.

However, the 33-year-old was unable to produce a moment of magic and had to settle for a par that meant Smith could celebrate an extraordinary victory at the Home of Golf.

McIlroy and Ryder Cup team-mate Viktor Hovland began the day four shots clear of the chasing pack after matching third rounds of 66, with Hovland the first to stumble as he three-putted the fourth from long range.

An errant drive then meant Hovland was unable to reach the par-five fifth in two, but McIlroy easily found the putting surface with a towering iron shot and two-putted for his first birdie of the day to move two ahead.

Smith, who had covered the front nine in 34, birdied the 10th and 11th to briefly close within one of McIlroy, only for the north Down man to respond immediately.

Although he had driven the green on the 10th, McIlroy was closer to the flag on the eighth on the massive shared green, but coolly two-putted from 125 feet.

Smith made it three birdies in a row after driving the green on the par-four 12th and when he also holed from 18 feet on the 13th, McIlroy had company again at the top of the leaderboard.

An inspired Smith then took the outright lead by extending his birdie streak to five by two-putting from the back of the green on the par-five 14th, something which proved beyond McIlroy in the group behind.

Smith looked in danger of falling victim to the notorious 17th when his approach came up short and left his path to the flag blocked by the Road Hole bunker, but the world number six calmly putted up to 12 feet and holed for a vital par.

McIlroy won the Open at Royal Liverpool in 2014, but an ankle injury suffered playing football meant he was unable to try to retain the Claret Jug at St Andrews the following year.

The 33-year-old admitted this week therefore felt like the title defence he never had and enjoyed an ideal start with an opening 66, the same score he shot to begin his wire-to-wire victory at Hoylake.

It continued a welcome trend of good starts for McIlroy, whose opening 73 in April's Masters meant he had been a combined 35 over par in the first round of majors since his last victory in the 2014 US PGA.

Since then he started with a 65 in the US PGA and a 67 in the US Open, but was all too aware of failing to turn those into overdue wins, a third round of 74 doing the damage at Southern Hills and a 73 at the same stage at Brookline proving equally costly.

This time there was no fading from contention for McIlroy, but he simply had no answer to an incredible performance from Smith, who adds a major title to his Players Championship victory earlier this year.