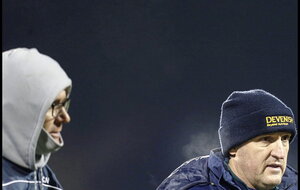 Andy McEntee (centre) during his time in charge with Meath Picture: Margaret McLaughlin.

ANDY McEntee rhymes off what he needs as if he’s ordering a new bathroom suite.

“You’re looking at a new three, a new six, possibly a new midfielder, new centre-forward and a new full-forward – so there’s big change. But these things have to happen. I really can’t complain about the guys that have come in and their application.”

After all, it’s the challenge that drew him to Antrim in the first place – a county that has yo-yoed between Division Three and Four for as long as successive county boards and long-suffering supporters care to remember.

Former boss Enda McGinley finally hauled them out of Division Four in 2021 and for the first handful of games in Division Three back-to-back promotions looked a possibility.

But the wheels came off down in Louth and the team looked like it was running on sand for a while afterwards.

Pre-season training has been tough at times, probably bordering on gruesome.

Some players decided it wasn’t for them, while others already declared their hand before McEntee took over.

While they’ve lost some valued experience within their ranks, the noises coming out of the Antrim camp are that they are fitter.

“I think the work we’ve put in with our fitness, we’re planning to not fade away towards the end of the League,” Kevin Small said after their McKenna Cup loss to Cavan earlier this month.

“Every team is doing the same, they’re just trying to get their work done so that it’s all banked when you play the matches,” the St John’s man said.

“And it will stand by you if you do the work. You just know with Andy: this has to be done. You need that bit of mental toughness to do all the work and the sessions on your own. We’ll be a hard-working team under him. I don’t think you’ll go to an Antrim match and say: ‘The lads didn’t work hard enough there’.”

The former Meath manager is slowly getting his head around things. From last season’s Ulster Championship loss to Cavan, the spine has been ripped out of the team.

McEntee knew he wasn’t entering a footballing utopia when agreed to take the reins, but he did remark on the excellent attitude and application of many new faces that have thrown their hat in the saffron ring this year.

The McKenna Cup yielded two losses but the narratives differed between the Armagh and Cavan games.

“Whatever about the Armagh game, the Cavan game probably showed a lot more appetite for the fight,” McEntee said.

“You find out things about players and about how people approach games, so you’re learning all the time. It is a short time period and I’m sure my thoughts on players will change; they already have a couple of times and will continue to change.

“Training is fine and all that but until you see guys in the white-heat of battle, you’re always trying to find out.”

The Antrim footballers are on their travels four times in this season’s Division Three campaign, which looks harder than last year with the arrival of Cavan and Tipperary (from Division Four) and Down and Offaly (relegated from Division Two) leaving that distinct impression.

McEntee acknowledges the notion that Division Three looks a lot stronger than before, but remains miffed over the way the most important inter-county games for so many counties are scheduled in the depths of winter.

“I’ve always been of the opinion – and I’m not just sure of the wisdom of it – is the most important competition (the National League) is being played at the worst time of year.

“You’re looking at games that are going to have the biggest influence on your year, potentially, the best matches of the year being played at a time when you wouldn’t put a milk bottle out,” he said.

“I remember Meath’s first game last year was down in Galway in Salthill. There were people down for the weekend but wouldn’t go to the game (because of the bad weather). The following week against Roscommon in Navan was no better.

“You look at Down’s performances in the McKenna Cup with their history and tradition. You look at Offaly and as a Meath man, you know when you play Offaly you’re in for a battle and are always a dangerous animal.

“You look at Longford’s performance in the O’Byrne Cup, you look at Fermanagh, Westmeath… Where’s your easy games coming? There’s none!”

Given the newness of this Antrim squad, they don’t have to look outside their own county for inspiration. The Antrim hurlers, under the steady tutelage of Darren Gleeson, have spent a good chunk of the last few seasons dining at the top table.

“We haven’t had much interaction but one thing we can take from the hurlers is with the right application and the right attitude you’re capable of mixing it with some of the very best. They are a really good example of what hard work and application can do.”

The first acid test is Offaly…