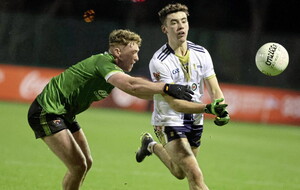 QUB's Dan Higgins and Ulster University's Josh Largo-Ellis will both be in action tonight. Picture by Hugh Russell.

THE real Ulster University needs to stand up, from the throw-in, tonight when UCD come to Jordanstown to battle it out for a quarter-final spot in this round three clash.

After losing out to Queen’s in their opener, UU’s Sigerson prospects were hanging by a thread when they went in at half-time eight points adrift of ATU Donegal at Ballinderry last Saturday.

But a second half fightback saw Ulster progress and, in the last 20 minutes, the Jordanstown students produced some scintillating attacking football to pull victory out of the jaws of defeat.

UU got over the line by a point and they’ll need to start tonight as they finished last time out, says forward Conor Cush.

“The first half against Donegal was a nightmare really,” said Tyrone player Cush who netted a vital late penalty to give his side the lead.

“We missed chances, we conceded an early goal and we went in at half-time eight down and a man down but we pulled it together and the last 20 minutes was just unreal. Everyone put their shoulder to the wheel and we got through it.

“It was the best football we’ve played so far and we’re going to need 60 minutes like that against UCD.”

After beating MTU Cork in their opener, visitors UCD lost 1-6 to 2-11 against defending champions University of Galway in round two.

But the Dublin outfit, who’ll be spearheaded today by Monaghan’s David Garland (2-8 so far) and Roscommon’s Daire Cregg (1-6), will travel north with the confidence of having beaten UU in the Ryan Cup last year.

“We were up big at half-time and they clawed it back to win by a point,” recalled Cush.

“We were missing Andrew Gilmore and Darragh Canavan that day but I’m sure they were missing players too so it should be another good game.

“We’re really trying to focus on getting a good start and then keeping it going. If we produce 60 minutes of football like the last 20 against Donegal we should hopefully get over the line.

“But we’ll need that against them. In the Ryan Cup we played well for half-an-hour but they ended up catching us out because we fell off at the end. So we need to be sharp for the full 60.”

Meanwhile, Queen’s hit the road to the National Sport Complex at Abbotstown, Dublin to take on a Billy Morgan-managed UCC side that lost their round one opener to the University of Limerick but recovered to beat ATU Galway by seven points in Tuam a week ago.

Kerry pair Cathal Begley (An Gaeltacht) and Dingle’s Dylan Geaney inspired a second half fight back for UCC and Sean O’Connor got a late goal in the 1-12 to 0-8 win.

They go into tonight’s game on a winning note while Queen’s have no time to lick their wounds after they were well beaten by DCU last Friday. Galway All-Ireland finalist Robert Finnerty registered 2-3 as DCU progressed to the quarter-finals with an 18-point victory.

The Dublin college got off to a dream start with Finnerty and Longford’s Keelin McGann finding the Queen’s net inside the first three minutes. Tyrone’s Rory Donnelly replied with a point for Conor Deegan’s side but DCU kicked on and Finnerty’s audacious second goal meant the game was done-and-dusted by half-time with the Belfast students 3-8 to 0-2 behind.

Points from Armagh’s Peter McGrane and Luke Donnelly and a second for Rory Donnelly was QUB’s return in the second half.