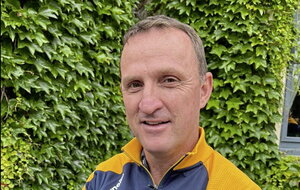 Manager: Andy McEntee
Fixtures: Jan 29 (2pm): Offaly (H); Feb 4 (6pm): Down (A); Feb 19 (2pm): Tipperary (A); Feb 25 (2pm): Fermanagh (H); March 5 (2pm): Westmeath (A); March 18 (2pm): Cavan (H); March 26 (2pm): Longford (A)
Last year: Fourth in Division Three
ANTRIM were solid in their first season back in Division Three in 2022, but they will be looking to kick on under new manager Andy McEntee.
Enda McGinley stepped away from the role after the Saffrons produced a meek performance in their Ulster Championship exit to Cavan before being dismissed from the Tailteann Cup at the first time of asking by Leitrim.
Meath man McEntee got the chance to run the rule over his options for the league in the McKenna Cup, although they exited at the group stage after defeats to Armagh and Cavan. The new manager gave 27 players game time in the defeat to Armagh, while ’keeper Michael Byrne was their most impressive player in the loss to Cavan.

Manager: Mickey Graham
Fixtures: Jan 29 (2pm): Westmeath (A); Feb 5 (2pm): Tipperary (H); Feb 19 (2pm): Longford (H), Feb 26 (2pm): Offaly (A); March 5 (2pm): Down (H), March 18 (2pm): Antrim (A); March 26 (2pm): Fermanagh (H)
Last year: First in Division Four, beat Tipperary in division final
WHAT was shaping up to be a memorable 2022 for Cavan was punctured somewhat by Westmeath in Croke Park. Defeat in the Tailteann Cup final came after promotion from Division Four, a division final victory over Tipperary and some impressive wins in their Ulster and Tailteann campaigns.
Mickey Graham had considered stepping down from the Breffni hotseat after that Croke loss to Westmeath, but has opted to stay at the helm for 2023 and the signs so far are good. They won two from two in their McKenna Cup group, with the likes of Oisín Brady and Dara McVeety impressing against Antrim and Armagh, before bowing out at the semi-final stage to Tyrone.

Oisón Brady impressed for Cavan in the Dr McKenna Cup

Manager: Conor Laverty
Fixtures: Jan 29 (2pm): Tipperary (A); Feb 4 (6pm): Antrim (H); Feb 19 (1pm): Fermanagh (A); Feb 25 (6pm): Westmeath (H); March 5 (2pm): Cavan (A); March 18 (6pm): Longford (H); March 26 (2pm): Offaly (A)
Last year: Eighth in Division Two, relegated
WHISPER it, but there might be a bit of optimism breaking out in Down with Conor Laverty installed at the helm.
Surely, after the misery of 2022, the only way is up for the Mourne county. Down fans will be desperate to look back on the ignominy of relegation from Division Two followed by limp surrenders at the first stage of both the Ulster Championship and the Tailteann Cup as a nadir.
McKenna Cup wins over Monaghan and Donegal and a semi-final stalemate with Derry, settled in the Oak Leafs’ favour by a penalty shootout, have fostered that precarious early season confidence. The likes of Pat Havern and Barry O’Hagan will have big roles to play in building momentum.

Manager: Kieran Donnelly
Fixtures: Jan 28 (6pm): Longford (H);  Feb 5 (2pm): Offaly (A); Feb 19 (1pm): Down (H); Feb 25 (2pm): Antrim (A); March 5 (1pm): Tipperary (H); March 18 (6pm): Westmeath (H); March 26 (2pm): Cavan (A)
Last year: Fifth in Division Three
KIERAN Donnelly’s first year in charge of the Fermanagh footballers was a steady one – they retained their place in Division Three, exited to Tyrone in Ulster and reached the quarter-final stage of the Tailteann Cup. Now, however, will be viewed as the time to start putting down markers of progress.
The Erne county were given two early year wake up calls in the form of Derry and Tyrone in the McKenna Cup, and those games should stand them in good stead going into their opening league game against Longford.
Garvan Jones up front and Ronan McCaffrey at half-back provided cause for optimism in those pre-season games.

Manager: Paddy Christie
Fixtures: Jan 28 (6pm): Fermanagh (A); Feb 5 (2pm): Westmeath (H); Feb 19 (2pm): Cavan (A); Feb 26 (2pm): Tipperary (H); March 5 (2pm): Offaly (H); March 18 (6pm): Down (A); March 26 (2pm): Antrim (H)
Last year: Sixth in Division Three
LAST year, Longford escaped relegation to Division Four only on scoring difference and Paddy Christie will be keen to inspire an improvement in his first campaign in charge.
And the early signs look good. The midlanders racked up emphatic wins over Carlow and Laois and battled to a draw with Meath on their way to topping their O’Byrne Cup group.The former Dublin star will be under no illusions as to the size of the task at hand, however, as he leads a team into the league campaign which lost both its solitary outings in the Leinster Championship and the Tailteann Cup in 2022.

Manager: Liam Kearns
Fixtures: Jan 29 (2pm): Antrim (A); Feb 5 (2pm): Fermanagh (H); Feb 19 (2pm): Westmeath (A); Feb 26 (2pm): Cavan (H); March 5 (2pm): Longford (A); March 18 (6pm): Tipperary (A); March 26 (2pm): Down (H)
Last year: Seventh in Division Two, relegated
The Faithful county, under new management in the form of Kerry native Liam Kearns, dropped into Division Three along with Down after a tough campaign in the second tier.
Although Offaly exited at the first round of the Leinster Championship last year, they went on a run to the semi-finals of the Tailteann Cup, losing to eventual champions Westmeath, and Kearns will see this as a platform to build upon.
Controversy surrounded Offaly’s decision to pull out of their O’Byrne Cup semi-final with Louth, but they will have taken much from their group stage win over an experimental Dublin outfit.

Manager: David Power
Fixtures: Jan 29 (2pm): Down (H); Feb 5 (2pm): Cavan (A); Feb 19 (2pm): Antrim (H); Feb 26 (2pm): Longford (A); March 5 (1pm): Fermanagh (A); March 18 (6pm): Offaly (H); March 26 (2pm): Westmeath (A)
Last year: Second in Division Four, lost division final to Cavan
HAVING secured promotion from Division Four in the spring, 2022 promised much for Tipperary football. However, they then lost a Munster semi-final to Limerick before exiting the Tailteann Cup at the hands of Carlow.
David Power will be hoping that playing tougher opposition in Division Three will be a springboard to a more successful year for Tipp.
A win over Waterford and a battling draw with Limerick in the McGrath Cup will have limbered them up for their opening league game with Down.

Manager: Dessie Dolan
Fixtures: Jan 29 (2pm): Cavan (H); Feb 5 (2pm): Longford (A); Feb 19 (2pm): Offaly (H); Feb 25 (6pm): Down (A); March 5 (2pm): Antrim (H); March 18 (6pm): Fermanagh (A); March 26 (2pm): Tipperary (H)
Last year: Third in Division Three
WESTMEATH just lost out on promotion in spring 2022 before going on to Tailteann Cup glory in the summer, and new manager Dessie Dolan will be confident of engineering a more successful promotion push this time around.
Although they lost their O’Byrne Cup opener to Louth, Westmeath recovered to comfortably beat Wexford, with last year’s Tailteann Cup player of the year Ronan O’Toole looking raring to go again. Despite receiving a subsequent walkover over Kildare, Dolan’s men missed out on the O’Byrne knockout stages and should be well rested for their league opener with Cavan.