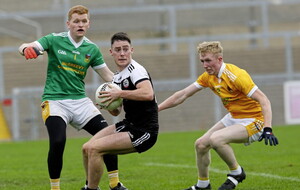 Ceilum Doherty is one of the young players who are driving Kilcoo's extraordinary run of success. Pic Philip Walsh.

THE pressure is off Kilcoo this season, says Aidan Branagan, and there is a better buzz in the camp of the reigning Ulster and All-Ireland champions.

Provincial winners for the first time in 2019, Kilcoo retained their title last year and captured a maiden All-Ireland crown too and those victories left the Magpies have nothing to prove as they focus on Sunday's Ulster final against Derry champions Glen.

The cabinets at their Mourne Mountains stronghold may be packed with trophies but that doesn't mean Kilcoo are any less focused or ambitious.

“We're training six or seven nights a week every night of the year for this,” said club veteran Branagan.

“I feel there's a better buzz about the team this year and there are seven or eight boys looking to get on the team, so they're pushing really hard at training.

“It's keeping the boys that are one to 15 sharp every game and keeping them on their toes. Last year there was a hell of a lot of pressure on us to win with Mickey (Moran) never having won an All-Ireland. But this year it's just all good fun. It's very enjoyable this year.”

Having won a first-ever Derry title, Maghera outfit Glen came close to beating Kilcoo at the Ulster semi-final stage last season. The game was on a knife-edge until the Magpies capitalised on a Glen mistake and pulled away in extra-time.

That game was tactical and cagey as both sides massed ranks behind the ball and played on the counterattack. Branagan doesn't necessarily predict a repeat on Sunday.

“Every game takes its own pattern,” he said.

“We'll just take it as it comes and I'm sure it should be good for the neutrals. It should be a good game.

“When you get out there anything can happen. The ball can be thrown-in and someone can get a goal with the first kick, so you just have to take what's in front of you.”

Branagan (39) had retired from football but the father of six was enticed back into the fold by Kilcoo joint-manager Conleith Gilligan. The former skipper had gone to the club to watch a league match and when Gilligan told him the team was “low in numbers” he agreed to pull his boots on again and slotted in at centre half-back.

“It was good to get back in,” said the 22-season veteran.

“I was going to the games and I was agitated watching them. It's not easy watching when you're used to playing all the time.

“I was keeping myself in good enough shape. I was still running two or three nights a week so I was grand that way.”

Branagan has been restricted to substitute appearance in the wins over Ballybay (by 10 points) and Enniskillen Gaels (by 11) but is content to see young players that he coached come through and make their names and the black and white jersey.

“At the end of the day, if there's 10 old men in the team it's never going to last. You need to be prepared to let them go ahead and get their time on the field.”