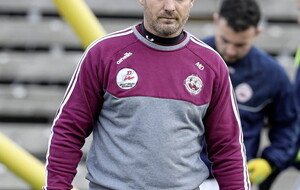 ONE chapter closed and another opened for Longstone native Mark Doran who has parted company with Monaghan champions Ballybay to concentrate on his role as a coach/selector with Clare.

Doran and Jerome Johnston both stepped down after Ballybay exited the Ulster Club Championship at the quarter-final stage and Doran moves on to his new challenge with the Banner footballers with fond memories of his time at the Pearse Brothers club.

“I loved my time at Ballybay, they're the best people in a club that I've ever dealt with,” he said.

“The people, the players… I couldn't say a bad word about any of them and I was delighted for them when we won the championship. After the Monaghan final I went and sat in the stand and took a couple of videos. I watched them the other day and it was brilliant to see how happy they were, they were all just delighted.

“But all good things come to an end and once I agreed to go to Clare I had it in the back of my head that it was now or never.”

It's a round-trip of over 400 miles from Kilkeel to Ennis and when Doran was initially approached by manager Colm Collins to take up a coaching role with the Division Two outfit he turned down the offer. But after mulling it over he decided the opportunity to work with vastly-experienced manager Collins and a talented group of players was too good to pass up.

As a keen student of the game, the chance to experience Munster football – Clare's season begins with a McGrath Cup outing against All-Ireland champions Kerry on January 9 – was another factor in his decision.

“My initial reaction when Colm asked me was: ‘Are you mad?!'” he admitted.

“I rang Paddy Tally and asked him how long it took him going to Kerry and he told me it was do-able. I met Colm a couple of times and talked to him and I liked what he was saying and he's the sort of boy I'd like to work with.

“So I started thinking it could work and he thinks I'll bring something a wee bit different to the set-up and I hope he's right. Time will tell on that, but it's an opportunity to work with a second division team and they're in with Dublin, Derry, Meath… When I thought it through I thought I would just go for it and I'll see how it goes for this season.

“It's the Munster Championship too and that's something completely different. Everywhere I go I want to learn something new. I learned plenty working with Paddy Tally in Down and Colm has been managing Clare for 10 years so he must be doing a lot of stuff right and I think I can learn something from him.

“Yes, there's a lot of travelling there but I'll get into the car, get the radio on and just sing away to myself down the road. Nobody will be listening to me!”

Doran intends to be in Clare twice-a-week for training as the Banner county build towards the start of their Division Two campaign. They begin with a home fixture against Mickey Harte's Louth on January 29 and face daunting trips to Croke Park to take on the Dubs and to Ulster champions Derry who missed out on promotion by a whisker last season.

“Clare have a lot of good players,” said former Down player Doran.

“I met them for the first time last weekend and the one thing I noticed straight away was that there's no egos, there is a real honesty with them.

“I was a bit worried about the language barrier and I said: ‘Boys, if there's anything I say you don't understand, I'll write it out'. That broke the ice and I found them mad-keen to learn and do anything you asked of them.

O'Doherty: There'll still be nerves in the Slaughneil changing room