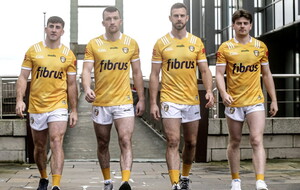 THE outcome of the provincial draws exposed the “folly” of the new All-Ireland Championship structure, according to Antrim manager Andy McEntee.

Following the conclusion of the National League and provincial Championships, 16 teams will enter the race for the Sam Maguire, with the remainder competing for the Tailteann Cup.

All provincial finalists, as well as the next eight teams in terms of National League ranking, progress to the All-Ireland Championship round-robin stages, with four groups of four.

However, when the draw was made in October, a lopsided Connacht draw presented a golden opportunity for one of Leitrim, Sligo, New York or London to reach the provincial final - nailing down a Sam Maguire Cup spot in the process.

With Division Three Westmeath also guaranteed a place after lifting this year’s Tailteann Cup, there will be a significant knock-on effect for Division Two counties bidding to finish as high up as possible.

Antrim – as well as fellow Ulster counties Cavan, Down and Fermanagh - will hope to be among the top 16 when the League placings are decided next spring, but even then it may not be enough to secure an All-Ireland berth.

“The way the Connacht Championship has been drawn out, it probably shows the folly of that whole system,” said the former Meath boss.

“Our aim is to get into Division Two but, if you look at it now, even if things go well for us in the League, there’s no guarantee. You have the tail wagging the dog here in a lot of cases.

“The provincial system is broken, and for a province with five counties to be dictating what’s happening, at the expense of others, just doesn’t make sense to me.”

Having been appointed in July, just a month after stepping away from the Royals, McEntee has had ample opportunity to run the rule over what Antrim has to offer.

He is looking forward to getting a look at his players in competitive action during January’s Dr McKenna Cup, but admits it is frustrating that challenge matches are not permitted by the GAA until the New Year.

“We got a letter from Croke Park saying no challenge matches before the first of January… I mean, I don’t know what planet these people are living on,” said McEntee, who led Ballyboden to the All-Ireland club SFC crown in 2016.

“Then you can make a real judgment.”

The potential of the county, though, is what brought him up the road in the first place.

And, from all he has seen so far, McEntee believes solid foundations are already in place for steady progress to follow.

“Mindset-wise, teams and players just need to have a little bit more confidence in themselves. Even look at Cargin’s performance last weekend, by no means were they outclassed by a Glen team that is very highly regarded.

“There are a lot of good players in Antrim. You can’t just wake up in the morning and half self-belief, it generally comes with doing the hard work and eventually you realise there’s no big difference between us and someone else.

“The past is done. There are so many plusses up here, facilities-wise, numbers-wise, finance-wise, organizational-wise… Antrim are as well positioned for success as anybody.”