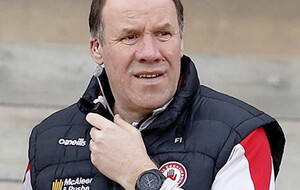 Tyrone fans may not have seen the last of Conor McKenna, despite his return to the AFL with Brisbane Lions.

McKenna (26) returned home two years ago after six seasons with Essendon to fulfil his dream of winning an All-Ireland with Tyrone, which he realised in 2021.

"He'll always be welcome back in Tyrone with open arms," said Logan.

"Who knows what the future holds, or whether he will be back again, but we wish him every good wish that there is."

Tyrone have suffered a number of withdrawals from the squad in the past year, of which McKenna's loss is one of the most damaging.

"Conor is a big loss, because he's a very talented sportsman. When people across the far end of the globe are wanting your services because you're so talented, you have to commend him in that regard," said Logan.

"He left a big contract previously to come back and offer two years to Tyrone, and he did what he said he would do.

"So I would see it that Conor sacrificed a lot for Tyrone, to do his bit for two years.

Logan first worked with McKenna back in 2014 as he emerged from Minor football as an outstanding talent.

He called the 18-year-old into his Tyrone U21 squad, but McKenna missed out on an All-Ireland title a year later, having signed for Essendon.

"He played U21s with us the first year, but then he headed for Australia at that stage."

McKenna revealed recently that he has decided to return to Australia for a second spell in the professional game down under.

He departed Australia in 2020 after six seasons, during which he played 79 games for the Bombers, returning home to fulfil his dream of winning an All-Ireland with Tyrone, which he realised a year later.

His decision to resume his Aussie Rules career is a major blow to Tyrone.

He joined Essendon as a teenager following an outstanding season with the Tyrone Minor team,

McKenna was a star of the Tyrone minor side that won the Ulster title in 2013, after which he opted to travel to Australia and pursue a career as a professional footballer.

He played a key role in Tyrone's 2021 Sam Maguire Cup success, scoring two goals in the semi-final win over Kerry and setting up the clinching goal for Darren McCurry in the decider.

McKenna's imminent departure is the latest in a series of forwards lost to Tyrone, following the decisions of Mark Bradley, Ronan O'Neill, Paul Donaghy and Lee Brennan to quit this year.