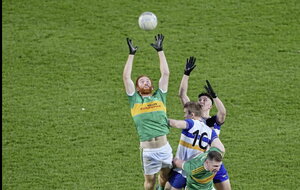 GLEN have All-Ireland winners on the inter-county front with Derry, but Conor Glass knows how much it would mean to those former stars if the Maghera outfit were to win 'the Ulster club'.

"It would mean everything," insists the midfield star – and he's not just guessing at that.

"Some club members – the likes of 'Rooster' (Fergal P McCusker) and Enda Gormley - did say Glen winning the county title [last year] was the best day of their lives. It shows how much it means to them.

"It's always a privilege to put on the Glen jersey and it's our role to be role models for people around the town and to leave the jersey in a better place when we're finished."

Gormley and McCusker – whose brother Damien was also on that Derry 1993 team – played their parts in moulding many of the Watty Graham's club's current senior stars to Ulster success at Minor and U21 levels.

Yet the club's biggest day was probably last year's first ever county senior triumph, beating Slaughtneil, a feat they repeated this time around.

"It was massive," says Glass. "Obviously last year was our first championship. The minor (success) was obviously good for the club but for us to win the county title was massive."

Glen had lost the 2019 Final to near neighbours Magherafelt; rather remarkably, that was the club's first ever county senior decider.

"It was the bear on our back," acknowledges Glass. We proved a few people wrong throughout the county and other counties too. It's finally good to put it up to other champions in Ulster."

Retaining the John McLaughlin Cup, after helping Derry end a 24-year wait for the Ulster SFC earlier this season, provided a double boost for customers to Glass's recently opened Café 3121 in Maghera, he says with a laugh:

"There's always a lot of kids coming in to see me and get pictures. It is hard to get away from the football side of things. My main focus was to try the café because it is my interest away from football. It's hard to try and separate the two but I'm enjoying the two.

"If we'd have lost the county final we probably wouldn't have been open for a week. That would probably have been the first week all the Slaughtneil boys came in!"

He has found the time to work on his own game too, adding more attacking elements: "There's always different things to learn. Last year I was probably more a defensive midfielder whereas this year I'm probably trying to add a few more strings to my bow in terms of going forward and trying to create scores.

"Obviously aerial ability is one of my main strengths and I try to implement that as well. Trying to implement all three is the making of a good midfielder. I feel like I've been able to do that over the last twelve months. But there's still a lot to learn."

On Sunday past Glen achieved another first, reaching the Ulster Club SFC Final, having been pipped after extra time by eventual All-Ireland Champions Kilcoo – who they will meet again on December 11 in the Athletic Grounds in Armagh.

"It's a big achievement for the club – always good to make an Ulster final. Obviously we didn't get to one last year. We set out to go one step further this year and thankfully now we're in a position to give it a crack."

A Kilcoo v Glen final re-match was anticipated by many, but Glass says they never looked further than getting past rivals from Tyrone, and then Antrim:

"That hasn't got to the team at all or around the town. We're coming up against county champions. They have earned their right to be in this competition too. Errigal Ciaran put it right up to us and so did Cargin. None of them were an easy challenge."

Glen won by four and five points, but both contests were closer than those score-lines might suggest, something that Glass feels might stand him and his colleagues in good stead:

"It is always good playing tight games because you always get a lot of learnings out of it. That should put us in a good position against Kilcoo. Last year was a tight game – it came down to one mistake. The more tight games we can get out of then the more benefit we'll get out of it."

Still, he knows how tough Kilcoo will be, with the Down men having brushed aside the challenges of Monaghan's Ballybay and Enniskillen Gaels of Fermanagh, by 10 and 11 points respectively:

"They're a serious team. I watched them [on Saturday night] with a close eye. The ability to do that over 10 of the last 11 Down championships.

"They've been able to blood a few young players and keep that conveyer belt going. They're All-Ireland champions for a reason. They'll obviously have a close eye on us too." 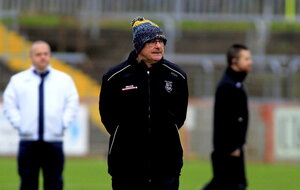 Galbally's McGarrity delighted to be busy in the depths of winter

Kicking Out: If there's nobody about to tell the stories, do they even exist?