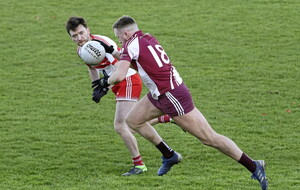 IT may seem chaotic at times, with team members popping up in areas of the field that bear little correlation to the numbers on their backs, but it’s all part of the Stewartstown plan.

Versatility lies at the heart of a project undertaken by managers Blake Smyth and Peter Armour almost 12 months ago, when they encouraged their players to step out of their comfort zone and push the boundaries.

A fluid system has proven to be highly effective, and with a Tyrone League and Championship double wrapped up, the Harps are now chasing a second Ulster Club JFC title in tomorrow’s final against Drumlane of Cavan.

“Big credit has to go to Blake and Pete. At the start of the year we played a lot of friendlies, just got the boys playing football, moved boys about in different positions, so everybody is comfortable on the ball and everybody loves the running game,” said team captain Mark Rooney.

Injuries have impacted heavily on squad depth, with Shea Burke and Shea O’Neill suffering season-ending knocks in the county final.

Others have stepped up to fill the void, but a further blow has robbed the Tyrone champions of another key man, with Fearghal O’Neill ruled out by illness.

“We lost the two Sheas in the county final, and unfortunately we have lost Fearghal O’Neill due to illness.

“Boys have had to step in, but thankfully we have a good strong squad this year, with plenty of good men to come off the bench.

“Fearghal had taken a break football for a few nears, doing marathons and things, but he has come back this year and has been a great member of the squad.

“He has come on in numerous games and filled different roles in the team. The boys will be going out on Saturday to try and give him a boost.”

Drumlane have come through what has arguably been the more difficult side of the draw, including a preliminary round, to reach their first provincial final.

The Clones decider represents the biggest test to date for a Stewartstown side that has coasted to comfortable victories over Teconnaught of Down and Donegal champions Letterkenny Gaels.

“We know they have had an extra game, and they have been racking up some serious scores.

“I think they finished third or fourth in Division Two in Cavan, so we know they’re definitely a good team and we’ll have to be on our game,” said Rooney.

The Harps have been scoring heavily in League and Championship this year, with Dan Lowe and Gareth Devlin leading the way, but their finishing in the semi-final win over Letterkenny raised some causes for concern.

“The performance wasn’t what we wanted it to be, but it gives you a few things to work on and sharpen up this week, and hopefully we won’t repeat them on Saturday.

“We had 13 wides, and if you do that in any game, you’re going to be struggling, so we want to sharpen up on that aspect.”