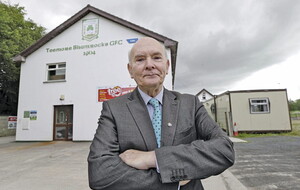 “He was a man for whom I had huge respect,” said Peter Quinn. Picture by Hugh Russell.

AN honourable man who was a visionary leader of the GAA, the late Sean McCague will be remembered as one of Ireland's most cherished and capable Gaels.

The Scotstown clubman, who passed away yesterday aged 77, was elected as the 33rd President of the GAA at the Annual Congress of 1999 and he ushered the Association into a new Millennium in terms of its outlook and its facilities during his term of office from 2000 to 2003.

The first Monaghan native to hold the GAA's the position of Uachtarain, McCague championed the abolishment of Rule 21 which forbade members of the police or members of the British Army from playing Gaelic Games.

Having been instrumental in securing funding for the redevelopment of Croke Park it was fitting that, in his final year as President, work on the transformation of ‘Headquarters' from an ageing stadium to the world-class facility we enjoy today was completed.

Peter Quinn was GAA president from 1991 to 1994. He first met McCague when they served as representatives for their respective counties on the Ulster Council over 40 years' ago.

“He was a man for whom I had huge respect,” Quinn, architect and the driving force of today's Croke Park, added.

“I've worked with a lot of people in the GAA but there was no-one I had more respect for than Sean McCague. If he promised he'd do something for you, you could bank it. He never made false promises, he was absolutely honourable. He was an exceptional man.”

Before coming to prominence as an administrator, McCague was better known as an astute manager. As a player, he'd reached only junior level for the Ballybay club but he excelled on the sideline and guided the Pearse Brothers to county and provincial titles.

After graduating to county management, McCague inspired Monaghan to three Ulster Championships and to the National League final of 1985. The former school principal went on to manage Ulster in the Railway Cup and was also a successful assistant-manager of the Ireland International Rules team.

Current GAA President Larry McCarthy said yesterday that his predecessor had left “an indelible mark” on his beloved GAA.

Saddened by the passing of his friend and colleague, Peter Quinn added: “You don't get guys like Sean McCague very often. They don't come around too often.

“He was always very well organised. He thought through what had to be done to achieve whatever he thought was needed. Lots of people fly by the seat of their pants, he never did that.

“He was never a great player but he understand the game and his management of the Ireland team in the International Rules was exceptional. I was lucky to be President when he managed Ireland in Australia and his management was just something else.

In a statement, Monaghan GAA said: “It is with a heavy heart that we mark the sad passing of former Uachtarain - Monaghan and Scotstown's Sean McCague.

“In his renowned GAA career Sean served as the 33th President of our association from 2000-2003 in which his legacy still remains and managed Monaghan Senior Football team to Ulster success in the 70s and 80s.

“Former principal of Scoil Mhuire in Monaghan, Sean was always at the helm of our association both locally and nationally and will be sadly missed by all. Our thoughts and prayers are with Sean's family and friends.”