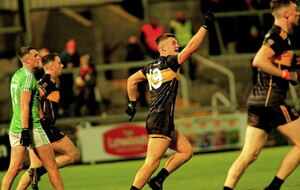 CORDUFF were reduced to 13 players for periods of their Ulster Intermediate Championship preliminary round win over Armagh's Shane O'Neill's and their quarter-final victory over Down champions Saval.

Despite that, Seamus McEnaney's resilient outfit came through both tests and on Sunday they face Cavan's top dogs Castlerahan in a winner-takes-all semi-final showdown at Crossmaglen that is certainly worth keeping an eye on.

Corduff boss McEnaney was one of six men sent off (two Corduff and three Saval players were also dismissed) in a bad-tempered affair against Saval. The Monaghan champions won by 11 points but there were more cards shown than flags raised in an overtly-physical game that descended close to anarchy.

“In winter football you must be a man and you must stand up,” he said.

Donohue has a full squad to choose from for Sunday's encounter at Oliver Plunkett Park. The former Cavan defender expects Corduff, who beat Magheracloone to win their county title, to be “formidable opponents”.

“They came through a very competitive Monaghan championship and we knew they would be formidable opponents in Ulster and definitely they have kicked on well,” he said.

In their quarter-final, Fermanagh champions Devenish led 10-9 going into the final straight but Castlerahan broke for the line and four unanswered points saw them through to Sunday's semi-final.

“They had a lot of pace and Barry Mulrone and Jason Love in the middle of the field and they were strong. We were expecting a tough battle and it was nip-and-tuck until the last 10 minutes. It was a powerful game, the quality was good and we finished strongly with four points to come from behind and sneak it.”

Castlerahan were senior champions in Cavan in 2018 and 2019 before unexpectedly slipping down to intermediate level. The club is on the rise again and, with nine survivors from the 2019 final still in harness, Donohoe says there is a “huge sense of excitement” around the Ballyjamesduff outfit.

“We've won our county and we've gone into this competition and we're meeting champions from different counties in Ulster,” he said.

“It's a great competition to be part of and we've really bought into it. Preparations have gone well and we're all focussed on Crossmaglen on Sunday.

“There's a lot of stake – the winner will take everything on Sunday. Semi-finals are all about winning and we're under no illusions that a tough, physical, battle-hardened Corduff side awaits. They have many strengths and they will be difficult opponents but I think we will embrace the battle ahead of us. It's Cavan versus Monaghan and there's always a strong rivalry there.”