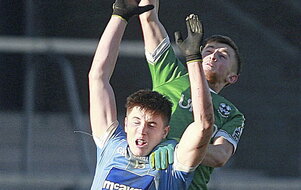 SOMEONE will die on a football field unless the GAA takes a harder line to stamp out striking offences, fears Philly McQuade, chairman of the Moy Tir na nOg club.

The Tyrone native has decided to speak out after one of his club’s players and the senior team manager were hospitalised with serious injuries after they were punched in separate off-the-ball incidents during a Tyrone promotion/relegation play-off match last month.

Manager Kevin Murray was struck from behind and knocked out cold during the match against Clonoe. His eye socket was fractured in two places.

In the same game, Tyrone player Ryan Coleman was punched in an off-the ball incident. His jaw was broken and he subsequently needed to have three plates inserted to knit the bone back together. A substitute teacher, Coleman has been forced to take time off work for which he won’t be paid.

McQuade says violent incidents of this type are a GAA-wide problem and they urgently need to be addressed. He fears that because of the strength and conditioning of modern players the risk of a one-punch on-field fatality is looming increasingly large.

“It is a problem in GAA at the minute, these strikes,” he said.

“I do think there’ll be a fatality in Gaelic Football with the way lads are built now and if they are vicious enough to strike, it’s very dangerous.”

According to the club chairman, Moy manager Murray was told after treatment at the Royal Victoria Hospital that if he had been hit just a couple of millimetres higher he could have lost his eye.

“Our manager came from Antrim for the game and his wife and family were there,” he explained.

“It was a shame on the GAA for him to leave the field in that state and go to the Royal and I think our county board – or one of the county boards – needs to take a stance on these incidents and tell these people: ‘You’re out for a year’.

“It’s all well and good for everybody putting the chest out and going on to the field but there’s going to be a fatality if this goes on and I don’t mean to be crying from a Moy point of view, this isn't sour grapes from us.

“I was talking to a fella in Carrickmore whose son was hit in an off-the-ball incident. He swallowed his tongue and only the opponents’ physio was there he might have died.

“And this is going on right through from underage – there’s disrespect for referees and young players know they can get away with it. I see it all the time and maybe we need to take a leaf out of rugby’s book where the captain is the only man that can talk to the referee?”

One of players involved in the Moy-Clonoe incidents was red-carded. The game was played on October 29 but the player alleged to have caused the other injury hasn’t been sanctioned and the Tir na nOg chairman says it is time for his county board to take action.

“We’re not very happy with how the county board has dealt with this,” he said.

“One player got a red card so he’ll get a suspension for striking but he struck off-the-ball and blind-sided a manager… It has to be something more severe.

“The other player – the guy who broke Ryan Coleman’s jaw – hasn’t been dealt with at all.”

The Moy club has been in this position before. Four years ago, Sean Cavanagh had his nose broken and was concussed following an incident in a game against Edendork. On that occasion Tyrone’s Competitions Control Committee ruled that they would take no further action after reviewing footage of the game and reading the referee's report of the match.

The Tyrone CCC was contacted by The Irish News this week but has made no comment.